Waitrose is launching more than 30 new private label and brand-name vegan products to capitalize on increased plant-based sales. The new products include first-to-market innovations such as a vegan “Meatless Feast” pizza and “Fishless” goujons. Other new options include meatless ham and pea ravioli, seitan schnitzel, and moussaka.

Waitrose says its aim is to provide ready-meals that are “quick and convenient,” but still flavorful. The supermarket also intends to stock shortcut cooking ingredients and plant-based alternatives, enabling customers to experiment with new flavors and types of food.

“This January we are doubling our vegan and vegetarian range with some innovative new products,” says Simona Cohen-Vida-Welsh, Waitrose & Partners Vegan Developer, in a press release.

“Our flavour-packed range offers both simple ingredients,” adds Cohen-Vida-Welsh. “For customers to build their own dishes and comforting ready meals for a quick and easy dinner.”

“Cutting down on meat, increasing your vegetable intake or going vegan has never been easier,” says Cohen-Vida-Welsh. 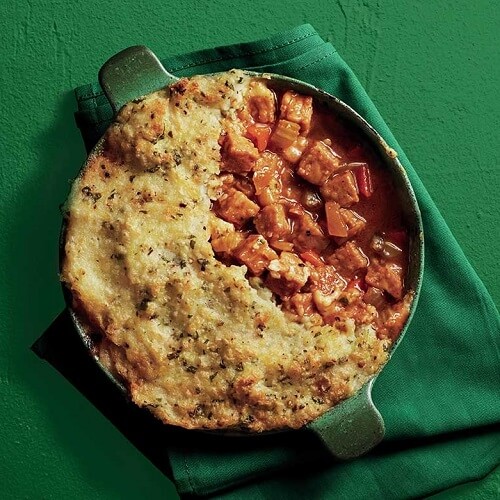 Waitrose has added the new vegan options to its existing range.

Last year, the sales of Waitrose vegan ready-meals overtook vegetarian options for the first time ever. The new, diverse array of quick-cook meals and ingredients is a response to customer demand.

“Last year we saw veganism and plant based diets making their way further into the mainstream,” says Cohen-Vida-Welsh. “And we see no signs of this slowing down.”

According to Waitrose, the new range also follows on from the biggest Christmas ever for vegan food. The supermarket says that Christmas sales were up by 40% thanks to customer demand for festive vegan dishes.

“The growing appetite for meat-free dishes has been reflected throughout the year”, said Chloe Graves, chilled vegetarian and vegan buyer for Waitrose, in a statement. “With rising sales of vegan and vegetarian products, as well as the introduction of exciting and innovative new products to the foodie market.“

Supermarkets are significant contributors to waste plastic. Efforts such as this to reduce the production of throwaway packaging make a huge impact on the environment.