Waitrose is set to launch new festive vegan products for the holidays. The British supermarket chain will debut vegan baked cheese and filo pastries just in time for Christmas.

The brand’s Breaded Vegan Baking Melts with Redcurrent Relish will feature a coconut-based, dairy-free cheese with a crispy breadcrumb exterior. The Festive Filo Swirls will be stuffed with Moroccan-style spiced vegetables with raisins and apricots.

Items included two vegan pâtés. Flavors included a pumpkin seed, butternut, and pine nut with tomato and chili chutney and a chestnut and mushroom with red onion and balsamic chutney. The range also featured a Festive Ring of vegan cranberry and apple bangers with filled with fruit and parsley crumb. And for dessert, a vegan iced fruit cake. 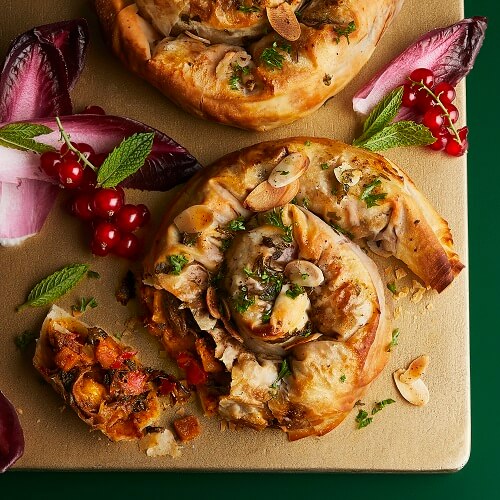 Earlier this year, the supermarket chain revealed it would be increasing its vegan options.

“This January we are doubling our vegan and vegetarian range with some innovative new products,” Simona Cohen-Vida-Welsh, Waitrose & Partners Vegan Developer, said in a press release.

The launch featured 30 brand-name and private label plant-based items. New products included vegan fish and pizzas. “Our flavour-packed range offers both simple ingredients,” Cohen-Vida-Welsh said. “For customers to build their own dishes and comforting ready meals for a quick and easy dinner.”

Cohen-Vida-Welsh added: “Cutting down on meat, increasing your vegetable intake or going vegan has never been easier.”

“We saw veganism and plant-based diets making their way further into the mainstream,” says Cohen-Vida-Welsh. “And we see no signs of this slowing down.”