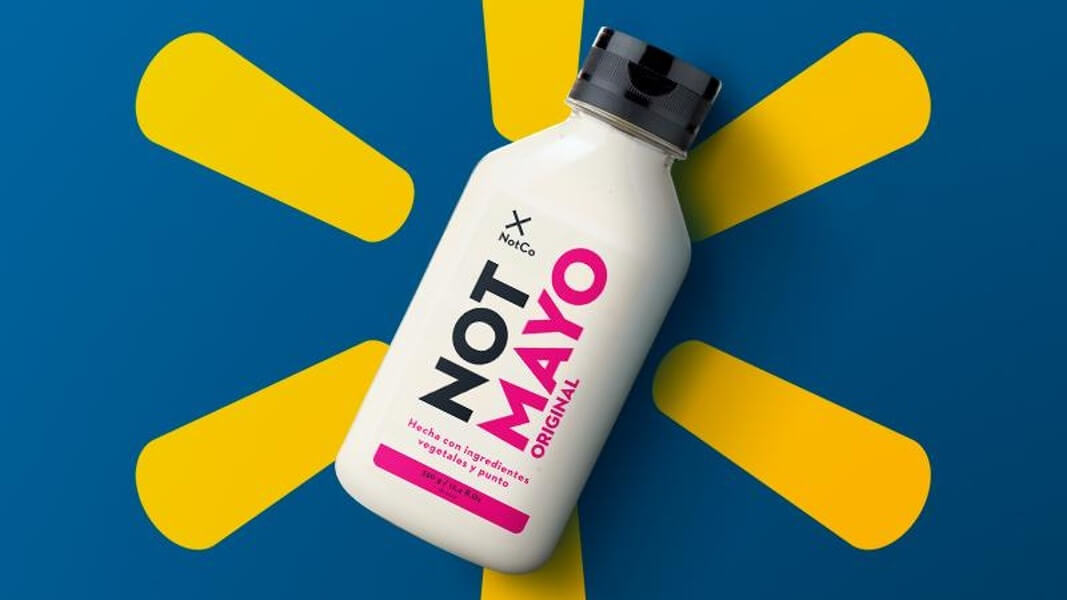 Chilean food tech company, NotCo, formerly called The Not Company, has taken a major step toward its mission of revolutionizing the Latin American food market. Its vegan mayonnaise, which was created through an artificial intelligence (AI) program, is now available in all Walmart stores across Chile.

“Proud of joining Walmart in the path to disruption. Not Mayo® is now available in every Walmart store in Chile with one single proposition: to become the biggest distributor of Not Mayo helping democratize good food in the way of making plant-based a mainstream choice,” NotCo CEO and co-founder Matias Muchnick wrote on LinkedIn. The news comes just a little over a year after the brand’s initial Walmart product launch announcement.

While NotCo sells three flavors of its chickpea-based eggless mayo in health stores throughout Chile, being offered in Walmart is a major step. Muchnick continued, “Selling more than 40% of retail sales in Chile, Walmart is the biggest retailer in the country. Honored to join such a great company and all of those to come.”

Co-founded by Muchnick, former astrophysicist Karim Pichara, and Pablo Zamora, NotCo aims to create a better future through sustainable, plant-based food with the aid of its AI software, named “Giuseppe.” According to the website, the software analyzes foods at a molecular level in order to suggest which ingredients should be used to create vegan versions of food that have traditionally relied on animal ingredients.

Additionally, Giuseppe can teach itself new techniques, allowing it to explore additional possibilities in making more realistic plant-based foods. Vegan milk, cheese, ice cream, and yogurt. By 2020, the company hopes to launch plant-based sausage and ground meat, all made with the help of AI.

“If we can map the genome of a lentil or whatever bean there is, you could easily understand and predict whether that bean could emulate an animal-based protein,” Muchnick told Tech Crunch over the summer. “We have mapped 7,000 plants and we don’t think we need more than that. We mapped them for their amino acetic structures…that looked like animal-based proteins.”

The Santiago-based food tech brand’s premier product, Not Mayo, is a fitting choice for the Chilean market, as the nation is the third-largest consumer of mayonnaise in the world. While the idea for NotCo was born in the U.S., the co-founders chose to launch the company in Chile after identifying an opportunity for healthier, environmentally-friendly plant-based products.

The three plan to distribute to the Brazillian and Argentinian markets next with the eventual plan of taking the company global.