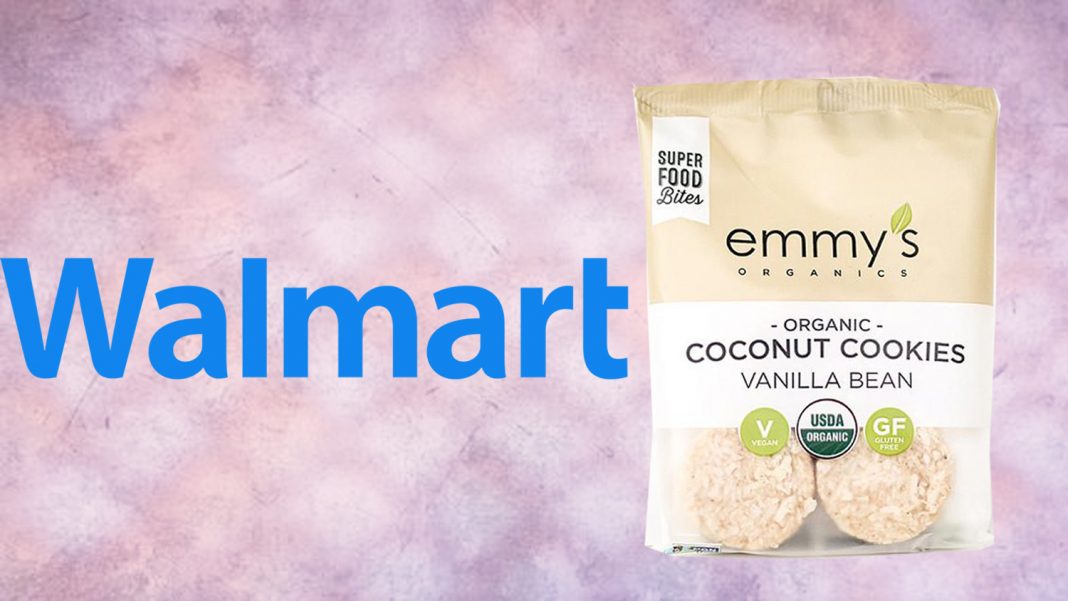 Multinational retailer Walmart is now stocking vegan cookies at 3,800 of its locations.

The company, which is the world’s largest by revenue, began selling plant-based Coconut Cookies by Emmy’s Organics in January.

“We’re thrilled to team up with Walmart and give shoppers a high-quality snacking option they can feel good about,” Samantha Abrams, co-founder of Emmy’s Organics, said in a statement. “Delicious, high-quality and responsibly-made, our superfood bites are the perfect replacement for the typical processed cookie.”

Emmy’s Organics came about when Abrams met co-founder and now-partner Ian Gaffney. The pair used to spend their weekends in Gaffney’s mom’s kitchen, baking treats throughout the night that didn’t contain gluten, since Gaffney is gluten-free.

They crafted an “incredibly decadent” cookie with ingredients from their local supermarket and the duo immediately knew “they had something special on their hands,” according to the brand’s website. They took their baked goods to a farmers market where the snacks sold out. Now, Emmy’s Organics – named after Gaffney’s mother who still lets them use her kitchen occasionally – can be purchased from leading retailers around the globe including Whole Foods, TJ Maxx, Rite Aid, and CVS Pharmacy.

At Walmart, shoppers can find Emmy’s Organics’ Peanut Butter and Vanilla Bean flavor of its Coconut Cookies. Made with cold-pressed coconut oil, they contain no artificial ingredients and are certified USDA organic, non-GMO, soy-free, grain-free, and vegan.

The brand also makes cookies in flavors like lemon ginger as well as pumpkin spice, which are said to taste like pumpkin pie. Additionally, Emmy’s Organics creates coconut macaroons in flavors such as vanilla and dark cacao.

Striving for a lighter environmental footprint, the brand produces its vegan products in a solar- and wind-powered facility that uses recyclable packaging and produces minimal waste.

Enjoying hump day ALMOST as much as these Vanilla Bean #cleancookies ?✨. Find this flav next time you’re at @wholefoods ?⠀ .⠀ #emmyscoconutcookies

Walmart has increasingly been dipping its toes into the vegan movement, stocking a range of cruelty-free fashion items and vegan food like dairy-free mayonnaise and plant-based meat. Three flavors of vegan oat milk by Silk, vegan-friendly Sour Patch Kids cereal, and animal-free leather bags, backpacks, and tech accessories can be found on Walmart shelves.

Vegan talk show host Ellen DeGeneres launched her own holiday-themed collection at the retail giant which consists of more than 40 vegan products.

Walmart is selling Emmy’s Organics vegan cookies for $3.99 for each 4 oz. resealable pouch. They can also be purchased online.