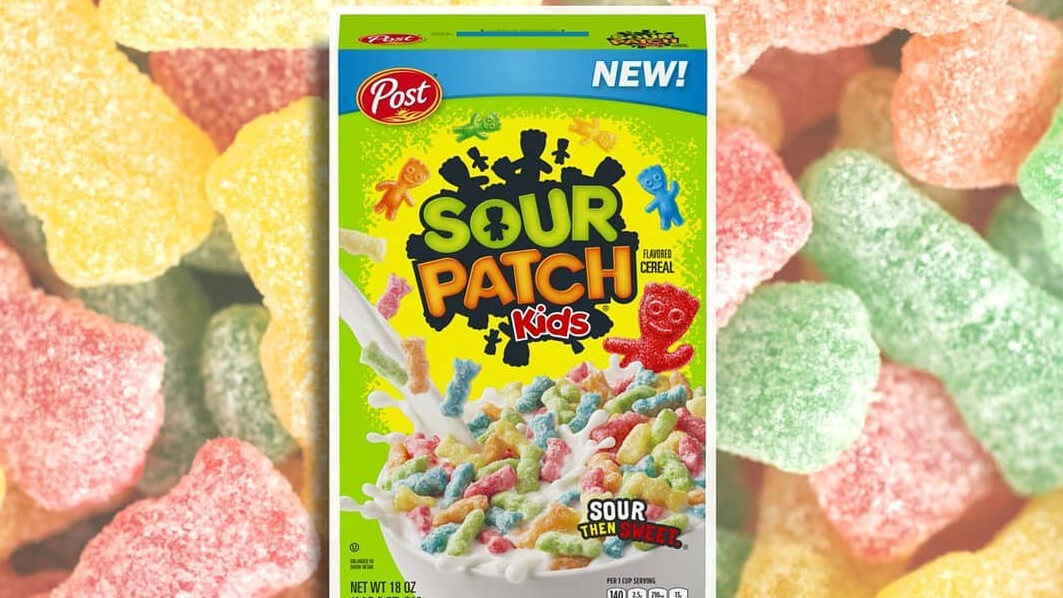 As reported by Delish, the news of the Sour Patch Kids Cereal was originally shared by @CandyHunting, a junk food Instagram account that posted a photo of the box in October. A Post representative told LIVEKINDLY that its new Sour Patch Kids Cereal is vegan – so get your favorite carton of non-dairy milk ready (hi, Oatly).

While it’s not yet available in stores, some early reviews are likening its flavor to a sweet-and-sour hybrid of Sour Patch Kids and Fruity Pebbles. And it comes in the shape of miniature, colorful sour humans – just like the candy.

According to Munchies, Post has also launched breakfast cereal versions of Hostess Honey Buns and Donettes. A Post representative informed LIVEKINDLY that the Honey Buns cereal is not vegan because it contains honey, but the Donettes are. The cereal looks like the iconic storebought doughnut – and a little like a Froot Loop covered in powdered sugar.

Most conventional cereals you’ll find in stores are vegan. But barring the absence of milk and honey, some varieties aren’t entirely plant-based. As The Telegraph has pointed out, popular brands like Cheerios, Kellogg’s Corn Flakes, and Rice Krispies are fortified with vitamin D derived from sheep’s wool grease. Vegan-friendly cereals include Rice Chex, Cascadian Farms Fruitful O’s, and Reese’s Peanut Butter Puffs.

According to Post, the Sour Patch Kids Cereal will launch in Walmart stores on December 26, followed by a widespread release in the new year. The Donettes will be available in most grocery stores starting January.