A team of researchers from the Queensland Government’s Department of Environment and Science (DES) used a drone to record the footage. The green turtles were seen nesting at Raine Island. The vegetated coral cay is the largest rookery in the world for green sea turtles.

The turtles, which are endangered, face population threats due to hunting, getting tangled in fishing nets, loss of habitat, and the over-harvesting of their eggs. Researchers also noticed the turtles weren’t reproducing at an expected rate.

“We sort of became aware that although there are these massive aggregations, the actual reproduction isn’t working so well,” Dr. Andrew Dunstan, from the DES, told CNN.

Dunstan said his team noticed other challenges. They realized turtles were getting trapped in the heat or falling off cliffs. Dunstan also said turtles’ nests would often flood.

The scientists were able to intervene to reduce these challenges. They then set about tracking the turtles to better help manage populations.

The team previously counted the turtles from a boat, but that presented its own set of difficulties. Dunstan explained using a drone is much more effective.

“Trying to accurately count thousands of […] turtles from a small boat in rough weather was difficult. Using a drone is easier, safer, much more accurate, and the data can be immediately and permanently stored,” he said in a statement.

The team is able to find 1.73 times as many turtles using the drone compared to observation counts made via boat. 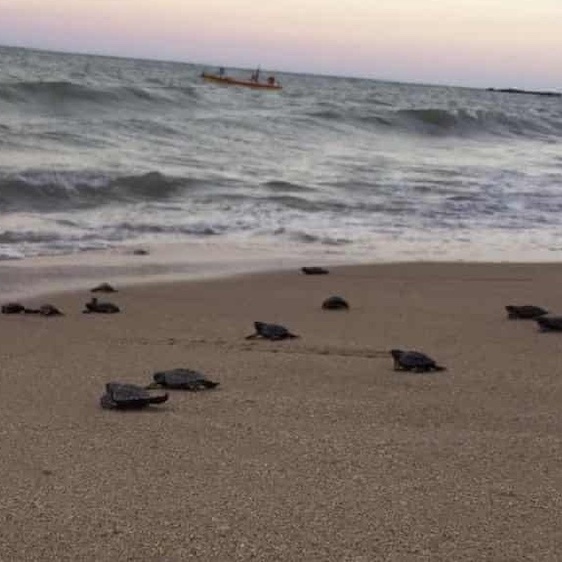 While humans have been hunkered down indoors during the coronavirus pandemic, sea turtles have been apparently thriving.

In April, more than 70,000 olive ridley sea turtles were seen nesting on emptied beaches along the coast of the eastern Indian state of Odisha.

Nearly 100 critically endangered sea turtles also hatched on a Brazilian beach that was left deserted due to the outbreak.

The Guardian reported 97 hawksbill sea turtles hatched in March in Paulista. The city is located in the north-eastern state of Pernambuco.

And in May, the largest number of rare leatherback sea turtle nests were found on Thailand’s deserted beaches. As a result of stay-at-home measures and travel bans issued to help limit the spread of COVID-19, the beaches had been void of tourists and locals.

Since last November, 11 turtle nests have been spotted. This is the highest number recorded in the past 20 years.