Batters says the ad “demonizes” meat. And that creates problems for Britain’s already struggling beef farmers. Earlier this year all four of the UK’s main farming unions said beef farmers were at “crisis point.” According to the BBC, farmer incomes have dropped 23 percent in the last year alone.

Chef Derek Sarno, Tesco’s Director of Plant-Based Innovation, says the clip is honest, that it’s “the way life is these days,” he told LIVEKINDLY via email.

The Conversation ‘Every Family Should Have’

A vegan himself, Sarno says he’s proud of Tesco “for being brave and bringing up the conversation every family should have.” He says the ad doesn’t demonize meat at all — it just makes the connection that meat comes from animals.

“There are [television] ads on every day about meat products. I’m not seeing glass walls on the factory farms,” he says. “Just because we as adults have been desensitized to it does not mean it’s not happening.”

NFU says the clip isn’t just a threat to beef farmers. It points to the dangers of missing critical nutrients in a shift away from meat. “We believe it is vital that children do not establish misleading views of food groups, which may later affect their health and diets.”

NFU says certain parts of the population, “especially teenage girls,” are not currently “eating sufficient quantities of these micro-nutrients [found in meat] to fulfill their dietary requirement.”

But Sarno says the vegan sausages featured in the ad — part of the new Tesco Plant Chef range — are equivalent or “better” than meat GDAs on comparison of like for like.

“As far as depriving of key nutrients — gimme a break — didn’t mom always tell us to eat our veggies growing up?” he mused. “Get with the times and adjust accordingly –  there is plenty of science proving plant-based is much better for our health and the health of the planet.” 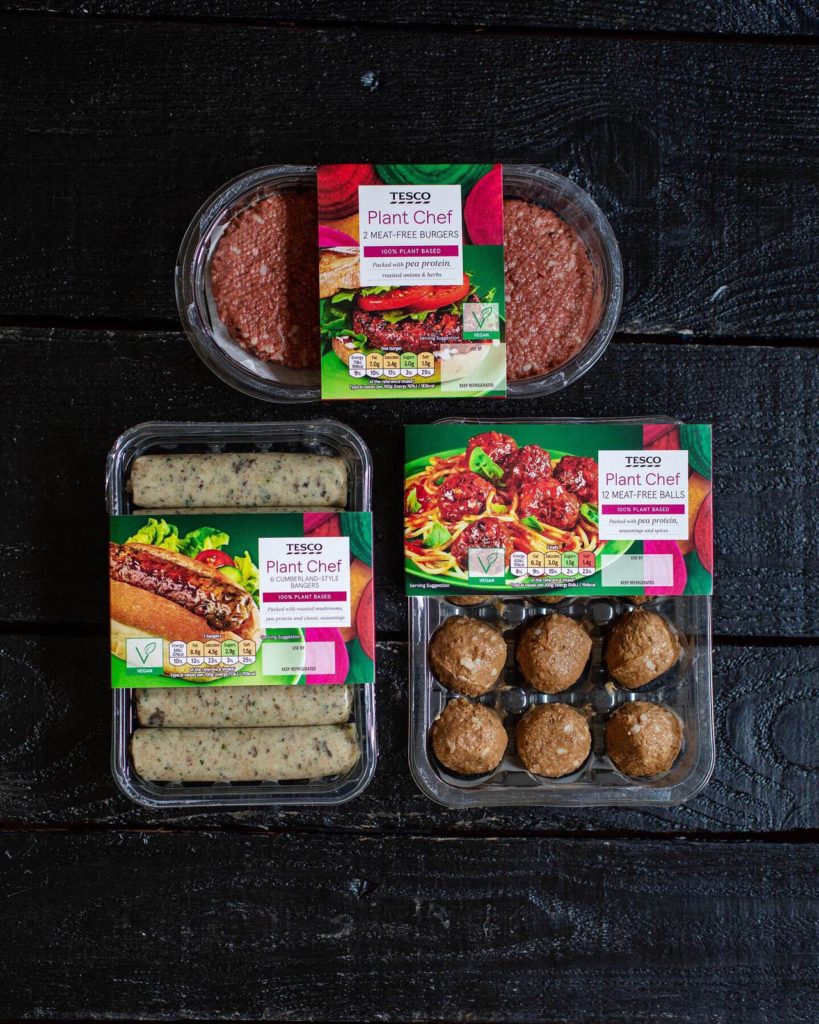 Tesco’s New Plant Chef range is geared toward families like the one in its new ad.

Driving the shift away from beef is changing consumer demand. And Tesco has been leading that shift in the UK. Sarno developed the Wicked Kitchen range that launched in 2018. Initial sales of the range doubled Tesco’s expectations. Wicked Kitchen features ready meals ranging from sandwiches to frozen pizzas. It recently expanded the range to include shelf-stable instant pots like a sweet potato and chilli mac. Sarno then set to work on developing Plant Chef with a dedicated plant-based team. The new vegan range is geared toward Tesco’s core consumer — like the father in the ad.

But underlying the need to create tasty and budget-friendly vegan meals for Tesco shoppers are Sarno’s unwavering ethics.

“The current food system is not sustainable; we must transition to more of a plant-based diet for the future sooner rather than later, and I’d encourage everyone to cut down on meat and animal products,” he says.

“Enough with the excuses.”