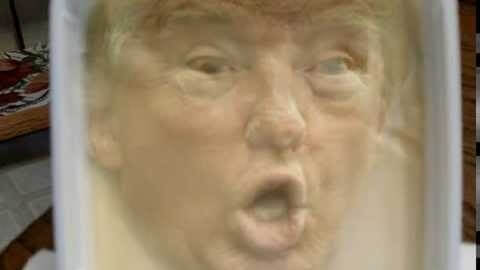 Who needs Twitter for important presidential updates when they have a tub of vegan butter sitting in their fridge?

Jan Castellano, a 63-year-old American woman from Wildwood, Missouri, noticed U.S. President Donald Trump’s face upon opening a tub of Earth Balance Organic Spread. According to The Huffington Post, Castellano wasn’t too thrilled about the sighting. “This was pretty much before I had coffee, so I was easily amused,” Castellano told the Post. “I needed to put on my glasses to make sure it was him.”

Castellano’s first instinct was to sell the tub-of-Trump on eBay and “donate the money to Hillary Clinton.” She soon dashed that thought, though, and bit the buttery bullet; she was hungry, after all. “It was the only butter I had, so I had to make the sacrifice,” she explained.

Similar to many Americans, Castellano hopes that Trump’s campaign “melts away like butter.” The controversial president’s approval rating is at 38 percent.

And his appearance in a vegan tub of butter only emphasizes Trump’s decisions that directly harm animals.

The American Society of Mammalogists, the world’s largest and oldest organization devoted to the study of mammals, fears that over 100 endangered species could directly be affected by the construction of Trump’s impassable border wall with Mexico.

In 2014, Barack Obama implemented a policy that banned hunters from bringing these so-called trophies into America. It was considered a promising move toward ending the ivory trade.

Thankfully, organizations, such as The David Sheldrick Wildlife Trust, are working to help protect and preserve Africa’s wildlife, “particularly endangered species such as elephants and Black Rhino.”

The Humane Society has made statements on the issue, too. The animal welfare organization continues to remind the public that “elephants are on the list of threatened species.” Zambia’s elephant population has dropped from 200,000 in 1972 to roughly 21,000.

As for that tub of vegan butter Castellano opened, she says she did wonder if his likeness was intentional and reached out to Earth Balance for comment. The company has yet to respond.