The Somerset seaside town of Weston-super-Mare is set to host its first-ever vegan festival.

Simply called  “Vegan Fair,” the festival invites everyone the opportunity to “explore plant-based living” inside The Tropicana, a landmark waterfront venue that acts as a hub for local arts and culture. Vendors will serve vegan food such as dairy-free cheese, cakes, chocolate, drinks, and more. Cruelty-free clothing and cosmetics will also be sold. Additionally, the fair will host talks and workshops, plant-based nutritional advice and support, and family-friendly activities for kids.

“Having lived a plant-based lifestyle, I have sometimes been challenged on my choice,” said Jo Harrington, co-organiser of Vegan Fairs, the UK-based company behind the event. “But once people try some of the delicious vegan food available to eat and cook, they often realise this isn’t a sacrifice but rather a delicious, cruelty-free way to live your life. Do join us on Sunday 5th August, everyone is welcome.” 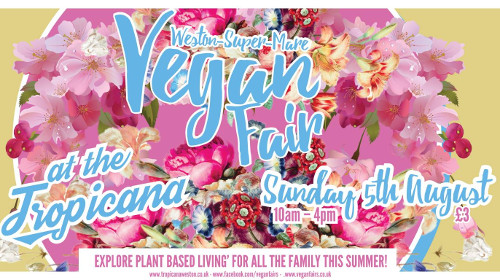 “Here at The Tropicana we are extremely delighted to have been chosen as the venue for this year’s Vegan Food Festival,” added Joanne Cridge Drinkwater, coordinator for The Tropicana. “For us it’s a great opportunity to work with new event partners and of course, sample all the tasty delights in store.”

Weston is not the first to host a plant-based festival organised by Vegan Fairs. According to the company, the great success of Frome’s first Vegan Fair and Somerset’s first Vegan Market inspired the team to continue to launch plant-based living events in the south west of England. By working with local vendors, shops, restaurants, venues, and more, Vegan Fairs hopes to engage the community and promote a compassionate lifestyle to vegans, vegetarians, and omnivores alike.

“There is a huge increase in the amount of people reducing the amount of meat and dairy they eat,” wrote Harrington.“More and more people are enjoying the benefits that a plant-based diet entails. In South West there is already a wide range of shops, cafes and restaurants offering delicious plant-based food. Times are changing and we’re very proud to be a part of that change.”

According to recent data, the number of vegans living in the UK has skyrocketed by 700 percent in the past two years. Research conducted by Kantar Market Insight shows that more than a quarter of evening meals throughout the nation are meat-free, indicating that vegans alone are not driving the demand for plant-based food.