The coronavirus pandemic has infected more than 3.9 million people worldwide. While experts are yet to pinpoint the exact origin of the novel coronavirus, the majority agree that it’s highly likely it spread to humans from wild animals. Wet markets, a type of open-air market common in East Asia, and live wildlife markets have been at the center of public health concerns. But what is a wet market? And what is its connection to coronavirus? 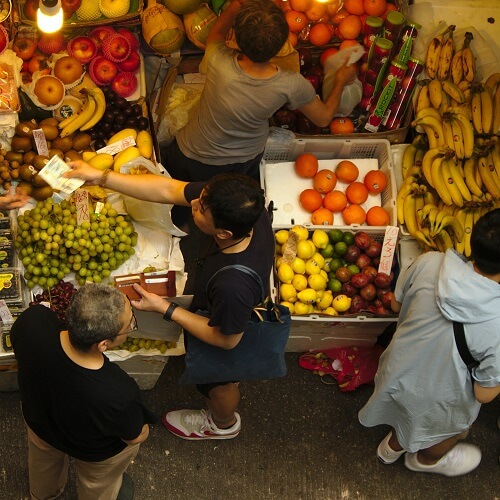 What Is a Wet Market?

China closed around 20,000 wet markets at the start of the coronavirus pandemic. Many markets began reopening last month.

A wet market is an open-air or enclosed market. Vendors sell fresh meat, fish, tofu, vegetables, and fruit. These share similarities with farmers’ markets in western countries. Wet markets may also offer prepared foods, such as dumplings and noodles, according to the award-winning Hong Kong-based environmental publication Green Queen.

Wet markets get their name from floor washing that occurs when vendors close up for the day. Sellers also take care to ensure that their stalls are clean, using ice or water to keep their food fresh. Wet markets are often one of the only places that people in urban areas like Hong Kong or Singapore can buy fresh produce directly from farmers.

A wet market may also sell live animals for human consumption, but they are not interchangeable with live wildlife markets.

What Is a Live Animal Market?

Live animal markets, also called wildlife markets, are a separate entity. As the name implies, these markets offer living and slaughtered wild animals for sale. These range from chickens and fish to snakes and civets. Not exclusive to East Asia, live animal markets exist worldwide.

The Huanan Seafood Wholesale Market in Wuhan, China is connected to some early coronavirus cases. There is currently no evidence proving that this market is definitely the exact origin. It’s a “grey-area market,” says Green Queen. It’s a wet market with a separate section for selling exotic meats and wild animals.

In China, live animal markets can be hubs for the illegal wildlife trade. Pangolins—an endangered scaly mammal whose scales and meat are valued in traditional medicine—are available at markets.

In 2017, the Chinese government issued the Wildlife Protection Law of the People’s Republic of China, which prohibited hunting and catching wildlife. According to a 2017 report from the Chinese Academy of Engineering, the wild animal meat trade generates $74 billion annually.

China recently went a step further to try and prevent future outbreaks. Titled the Comprehensively Prohibiting the Illegal Trade of Wild Animals, Eliminating the Bad Habits of Wild Animal Consumption, and Protecting the Health and Safety of the People, the bill bans eating wild or farmed terrestrial wildlife.

“There has been a growing concern among people over the consumption of wild animals and the hidden dangers it brings to public health security since the novel coronavirus disease (COVID-19) outbreak,” Zhang Tiewei—a spokesman for the top legislature’s Legislative Affairs Commission—said in a statement.

However, loopholes allow traffickers to continue to thrive within the system. The ban doesn’t prohibit the wildlife trade for other purposes, including medicine, fur, zoos, or as pets.

Traffickers are also shifting to e-commerce. E-commerce platforms aided in the removal, blocking, or deletion of information related to more than 140,000 wildlife products in the month after the ban. Around 17,000 accounts associated with the trade were also shut down. But, experts say that the government needs to put more pressure on e-commerce platforms to crack down on the trade.

“If they don’t play their role and are not able to step up their monitoring mechanisms, stopping online wildlife trade will be difficult,” Zhou Jinfeng, head of the China Biodiversity Conservation and Green Development Foundation told Al Jazeera. “I hope the government can come up with rules to urge online platforms to take their responsibility.”

Experts have made progress in tracing the coronavirus’s origins since the first international cases were reported last January.

It is believed to be zoonotic—a virus that’s able to jump from animals to humans. According to the Centers for Disease Control, 75 percent of new or emerging infectious diseases are zoonotic in nature.

Other pandemics of zoonotic origin include the 1918 Spanish flu, which killed between 20 and 40 million people worldwide. Experts believe the virus originated in domesticated birds.

Some experts believe that pangolins—trafficked via the illegal wildlife trade—may have potentially played a role in passing the novel coronavirus to humans.

Many experts think bats are the likely original source, much like the 2002-2004 Severe acute respiratory syndrome (SARS) epidemic, which infected more than 8,000 and killed 774.

Did Coronavirus Come From a Lab?

President Donald Trump said recently that the U.S. government was trying to determine if the virus came from a Wuhan lab. The World Health Organization released a statement confirming that the virus most likely originated from animals.

“All available evidence suggests the virus has an animal origin and is not manipulated or constructed in a lab or somewhere else. It is probable, likely, that the virus is of animal origin,” WHO spokeswoman Fadela Chaib said in a Geneva news briefing.

Robert F. Garry, professor of microbiology and immunology at Tulane University School of Medicine, told NPR that an animal may have acted as an intermediate host.

It’s possible that the novel coronavirus hopped between multiple animals at a live market.

Doctor Anthony Fauci, an immunologist and director of the National Institute of Allergy and Infectious Diseases, recently called for a global shut down of wildlife markets on the morning news show “Fox & Friends.”

“It boggles my mind how when we have so many diseases that emanate out of that unusual human-animal interface, that we don’t just shut it down,” he said. “I don’t know what else has to happen to get us to appreciate that…because what we’re going through right now, is a direct result of that.”

Factory farming also poses a similar threat to public health. According to Gregory Gray, an infectious disease epidemiologist, coronaviruses have been identified in pig farms. Not all of these viruses are zoonotic. But they are a cause for concern, particularly on concentrated animal feeding operations (CAFOs) that house 2,500 pigs on average. The close quarters increase the risk of the spread of disease.

“When respiratory viruses get into these confinement facilities, they have continual opportunity to replicate, mutate, reassort, and recombine into novel strains,” Gray explained in the journal Environmental Health Perspectives.

He continued: “The best surrogates we can find in the human population are prisons, military bases, ships, or schools. But respiratory viruses can run quickly through these [human] populations and then burn out, whereas in CAFOs—which often have continual introductions of [unexposed] animals—there’s a much greater potential for the viruses to spread and become endemic.”

Due to this, CAFO workers risk becoming infected. But public health agencies that monitor zoonotic diseases often overlook them. Additionally, Gray notes that agencies do not share animal disease sampling with the public. Experts believe this diminishes the ability to respond to new diseases before they become widespread.