Notorious for falling apart after a few washes, human rights violations, and polluting the planet, the fast fashion industry is a modern force to be reckoned with. But it doesn’t have to be the future of clothes. Innovation in biodegradable fashion could help make the industry more sustainable.

Fast fashion is a term that describes inexpensive, trendy, disposable garments, named for the rapid turnaround time from the design phase to production. These stores occupy malls nationwide, offering designs that, in some cases, were ripped right from the runway, remade on the cheap, and sold at an extremely low price. It’s estimated that the fast fashion industry produces approximately 1 billion garments annually.

According to the UN Environmental Programme (UNEP), the global fashion industry is responsible for 10 percent of carbon emissions. In 2015, the fast fashion industry created 92 million tons of wastewater.

Despite the heavy environmental impact of the fashion industry, we don’t hold onto the clothes for very long. Americans throw away 85 percent of the clothing they consume, about 8.5 billion pounds annually. Many retailers also discard or burn unsold garments. These clothes, cheaply made by underpaid factory workers located primarily in China and Bangladesh, are made from petrochemical-based textiles like polyester and nylon, which can take up to 200 years to decompose. The damage doesn’t stop there. Fast fashion garments made from these materials shed about half a million tonnes of microfibers, tiny plastic particles that pollute the water, every year.

It’s not just the fabrics, either. According to the Ellen MacArthur Foundation, a UK-based charity that advocates for a circular economy, dyes, threads, buttons, and tags are also a concern. Moving toward a “new textile economy,” embracing biodegradable fabrics and eco-friendly materials, would greatly benefit the environment.

Biodegradable materials and dyes, which decompose after being discarded, could help address the fashion industry’s pollution problem. Here’s what you should know about biodegradable fabrics:

While cotton biodegrades, it isn’t the most environmentally-friendly. Cotton requires nearly twice as much land as hemp per finished textiles. It takes 10,000 liters of water to grow just one kilogram of cotton compared to hemp. And cotton’s entire production process uses more than four times as much water as hemp. The majority of cotton is also not grown organically and relies on pesticides that have negative effects on the environment and human health. Organic cotton is better—but in terms of sustainability, it’s outpaced by other fabrics. Another issue with cotton is that while it will biodegrade, it’s treated with pesticides and dyes that can permeate soil once the fabric breaks down.

Hemp is highly versatile; the seeds are edible and the fiber is used to make paper and clothing. Not only are its land and water requirements lower than cotton, hemp is also better for the soil. It pulls fewer nutrients from the soil than cotton and its roots aerate the soil. Hemp plants produce 1,500 pounds of fiber per acre while cotton produces only 500 pounds per acre.

Hemp fabrics are stronger, more absorbent, and are a better insulator than cotton. It decomposes in a few weeks or a month. 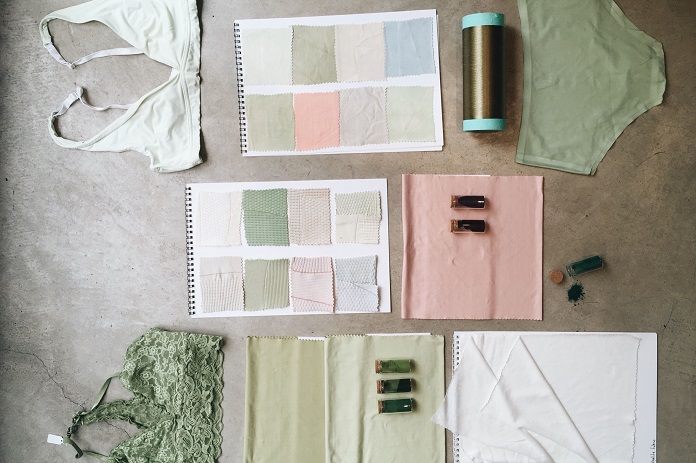 Algae is a renewable resource for eco-friendly materials. | Algalife

Algae has been identified as a potential ingredient for making plant-based meat. This versatile sea vegetable can also be turned into sustainable materials for the fashion industry. As well as addressing the need for more planet-friendly fabrics, there is an urgent need to use more sustainable dyes. Textile dyeing is the world’s second-largest polluter of water, according to the UNEP. A study found that the chemical dyes used to treat textiles can permeate the skin after prolonged contact. The ramifications of this still need further investigation, but it is potentially hazardous. The majority of clothing is treated with these types of dyes.

Algalife, a biotextile creation company with headquarters in Israel, produces biodegradable dyes and fibers from algae that are better for the environment. Algae is a sustainable and renewable resource. Algalife uses a closed-loop, zero-waste system: it grows its algae in solar-powered desert farms and it also uses 80 percent less water in its process.

Like hemp, the fastest-growing grass on the planet is also versatile. Bamboo fibers can be used to make composite materials for homewares and clothing. The bamboo plant requires no pesticides. It’s naturally regenerating and it improves soil quality. But, there is little information on the cultivation practices in China, where most of it is grown, so it is not clear how much land is used.

Perhaps the most confusing part of buying clothing made from bamboo is when it’s used to greenwash—to market something as more environmentally-friendly than it really is. There are two ways to extract bamboo fiber to be made into fabric through chemical or mechanical means.

The cellulose from bamboo can also be spun into rayon, which isn’t biodegradable and requires combining the pulp with sodium hydroxide and carbon disulfide. Half of the waste from the process cannot be reused, eliminating the possibility of a closed-loop system—when products are designed, manufactured, and sold to be used for as long as possible with minimal waste generation and environmental impacts. However, bamboo rayon does use fewer chemicals than cotton. Lyocell, a type of rayon made from bamboo cellulose, can be made in a closed-loop manufacturing process, is a more environmentally-friendly choice.

Bamboo linen is processed through mechanical means; the woody parts are broken down with enzymes, so the fibers can be combed out and spun into yarn (this is also how cotton and flax linen are made). It’s more eco-friendly than rayon and Lyocell, but it is costlier to make and more labor-intensive, so it’s not as readily available. Bamboo fabric can take a year or longer to biodegrade.

Sicilian startup Orange Fiber takes cellulose fiber from citrus fruit peels and turns it into a biodegradable yarn that can be spun into high-quality fabric that feels like silk. The closed-loop process utilizes a byproduct of Italy’s citrus juice industry, which produces 700,000 tons of fruit waste annually. Orange Fiber can be used alone, blended with other fabrics, and it can be made shiny or matte. The startup’s vegan silk was first brought to market by Salvatore Ferragamo in a 2017 capsule collection released on Earth Day. It was also used in H&M’s Conscious Exclusive 2019, which featured sustainable materials.

Yes—fabric made from beans. Soy fabric is an eco-friendly fabric made from the hull of soybeans leftover from food production. It is luxuriously soft with a cashmere-like feel and a little bit of stretch. Late last year, designer KD New York released an athleisure collection, featuring vegetable cashmere made from byproducts of the tofu industry.

Traditional cashmere comes from the soft neck hair of a type of goat native to the chilly plains of Mongolia, Southwest China, Iran, Tibet, Northern India, and Afghanistan. These goats are raised primarily in East Asia while the fabric is processed in the West.

Cashmere was once a rare fabric, but the fast fashion industry has made it more accessible; but not without consequences to the planet and the animals involved. Shearing the fluffy, protective fur from goats too early exposes them to harsh weather. Fast fashion’s demands have pushed herders to raise more goats, which in turn has been turning these regions into deserts.

Soy textiles provide a cruelty-free and sustainable option. They are biodegradable, the material is renewable (though soy is resource-intensive, about 80 percent of the world’s soy is grown for animal feed, not food), and the end result is as nice to the touch as real cashmere.

Microsilk is made by Bolt Threads, a California-based tech startup that also makes Mylo, a vegan leather made from mushroom mycelium. It was inspired by spider silk’s tensile strength and durability, but no spiders were harmed in the process. The company developed technology that allows it to replicate spider silk proteins using genetically engineered yeast. The proteins are fermented using yeast, water, and sugar before being isolated, purified, and then spun into rayon-like fibers.

Microsilk is still very new, but it has the potential to biodegrade because it is made from proteins. It is also more renewable than fossil fuel-based polyesters; the main input for Microsilk is the sugarcane grown for the fermentation process. Closed-loop production is also possible. Last summer, sustainable designer Stella McCartney teamed up with Adidas to make a biodegradable tennis dress made from Microsilk and cellulose-based yarn. McCartney has long been a champion of sustainable, closed-loop production in the fashion industry.

Many of these fabrics are made on a considerably smaller scale than fossil fuel-based materials, but the technological innovation and the drive to create the next generation of textiles is there. Fashion will continue to evolve; it’s up to larger brands to embrace new, better materials for both people and the planet.