Updated November 8, 2019. | Earlier this year, Kim Kardashian-West was — once again — enshrined in controversy. But this time it wasn’t to do with family drama, her cosmetics brand, or her fashion choices — it was all to do with an elephant.

During a trip to Indonesia, the reality TV star visited an elephant park with her husband, Kanye West. She captioned a photo of the pair with one of the elephants, “missing Bali! And the amazing elephant sanctuary.” A man — potentially the elephant’s owner — is also pictured, sitting on the animal’s back.

The response to the post wasn’t quite as positive as the Wests expected. Instead of a silent chorus of adoration and awe, the “Keeping Up With The Kardashians” star was met with an onslaught of comments labeling her “cruel,” “disgraceful,” and “gross,” some even called for her to take the picture down and others labeled it elephant abuse.

The trap the reality star (presumably) fell into, is believing that just because something looks ethical on the surface, doesn’t necessarily mean that you have the full story — particularly when it comes to wildlife tourism. 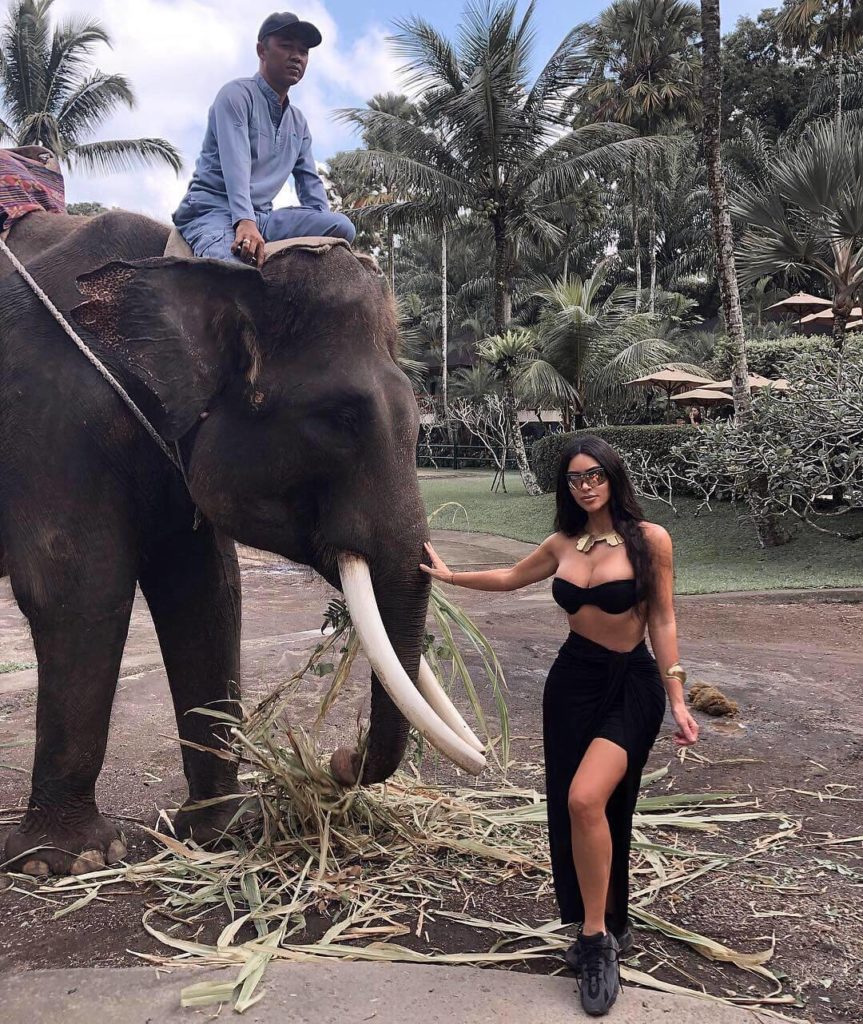 Hordes of tourists travel from all over the world to countries such as Thailand, Indonesia, Laos, and Vietnam, looking for new experiences, friendships, and stories they can tell for years to come.

Like Kardashian-West, many find themselves posing with elephants, riding them through forests, feeding them, and bathing them. Aside from bumping up their Instagram likes, many are out with the intention of supporting an honorable organization set up in the name of animal welfare.

What many don’t see (or some may not pay attention to) is the bullhooks behind the scenes, the chains, and the ropes used to control and tame an enormous animal, which — according to animal rights organization PETA (People for the Ethical Treatment of Animals) — would walk for around 30 miles a day in the wild.

Elephants don’t naturally give rides to humans, they don’t rely on them for food, and they don’t perform tricks for entertainment. They do this as a result of “crushing,” a process that — quite literally — crushes the spirit and wild nature of the animal, so that it can be trained and trusted around humans. 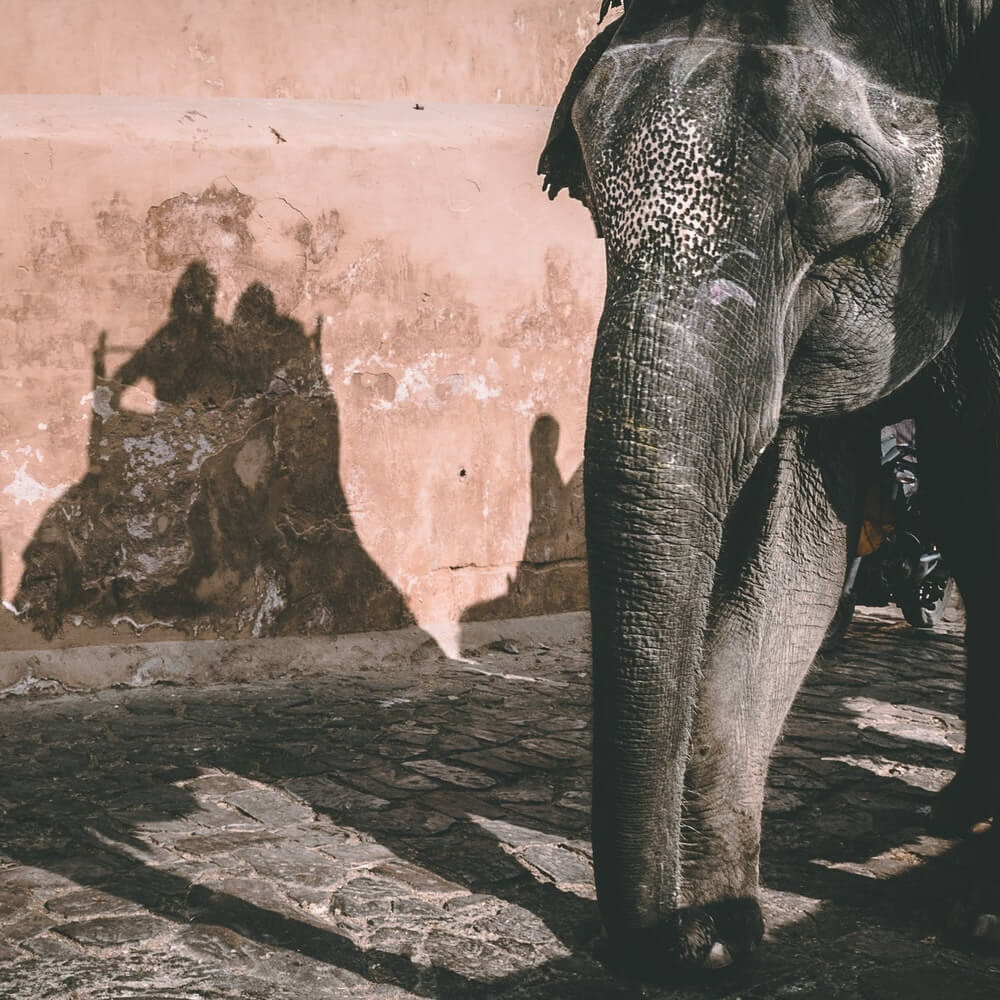 Captive elephants are tamed by “crushing”

“Baby elephants are tethered and dragged to a clearing where the crush cage is located,” says Thailand Elephants. “These fragile elephants will be kept in small crates, their front and back legs bound by ropes in order for their limbs to be stretched.”

When the crushing process is completed, the animal enters the tourist trade. They may be involved in painting, performing, giving rides, or begging. Begging is when an elephant is taken out onto the street of a busy city, in the hope that tourists will stop and pay for a picture or an interaction.

Many bonafide sanctuaries have cropped up across Southeast Asia, offering a home, gentle care, and respite for rescued elephants from the tourist industry. But at the opposite end of the spectrum, others have slapped on the word sanctuary to their name, but continue to exploit elephants, using bullhooks and offering rides to tourists.

The Difference Between a Real Elephant Sanctuary and a Fake 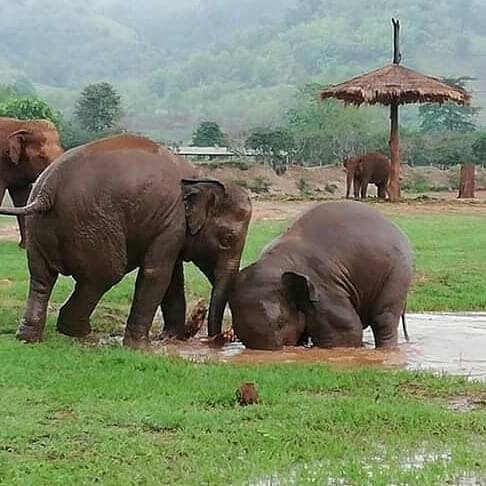 The key to telling the difference between a real sanctuary and a fake one is research. Which Kardashian-West claims she did, so this is where it gets tricky.

In response to criticism, the star said, “we visited an elephant sanctuary that has rescued these elephants from Sumatra where they would have otherwise gone extinct. It is an organization that is working to save these beautiful animals. We did full research before going.”

But not only was the elephant handler pictured sitting on the elephant’s back, so was Kardashian-West; an activity that a real sanctuary would never allow.

“Many parks advertise themselves as sanctuaries but they are not,” said Maria Mossman, the founder of non-profit organization Action for Elephants UK, to the Guardian. “Never go to a park that advertises shows, unnatural behavior, tricks or painting – and please, never ride an elephant.”

If a sanctuary allows visitors to ride an elephant, climb on it, or sit on its back, it is perpetuating the exploitation of elephants in the tourist industry, says Vicki Brown, an editor at Responsible Travel.

Bali’s Mason Elephant Park and Lodge, visited by the Wests, also uses bullhooks to control its elephants, another practice not seen in genuine sanctuaries. According to the Mirror, a worker said, “staff are told the gancho should be hidden when not in use. Staff keep it under their shirts or their arms to hide them.” 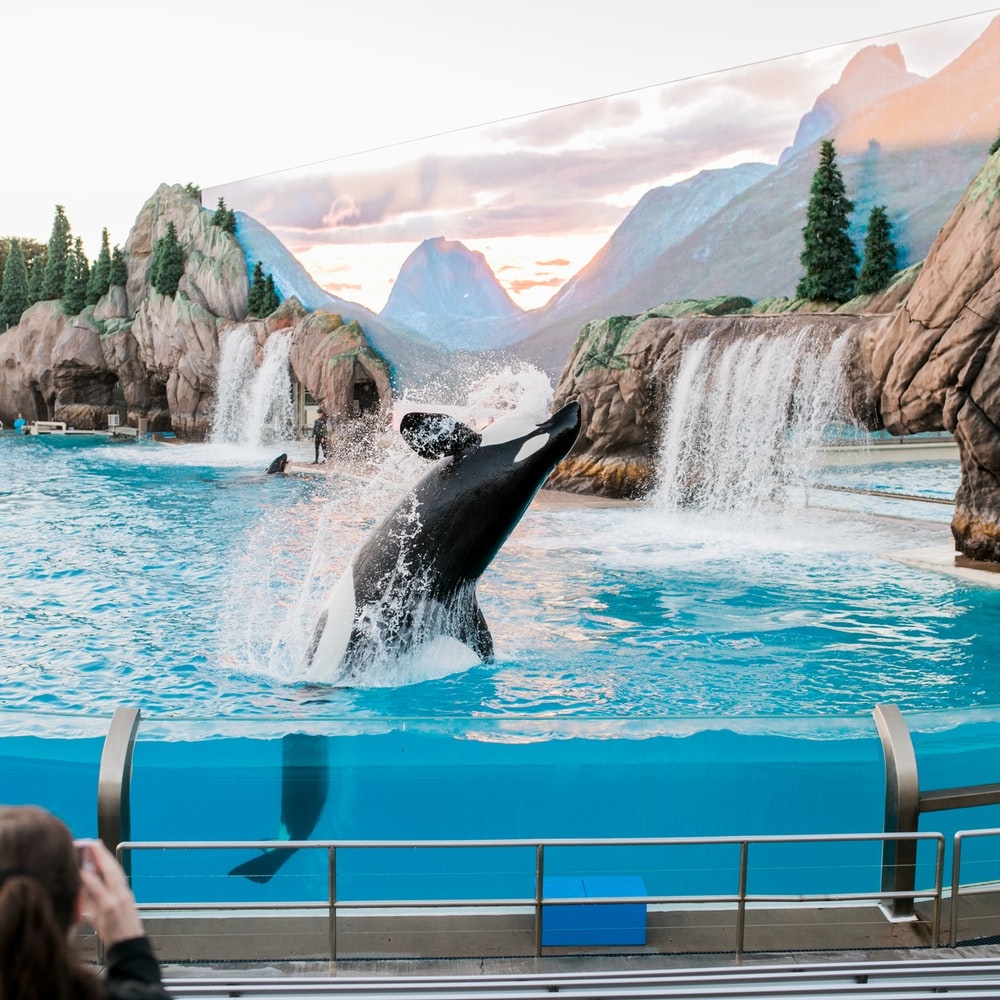 SeaWorld’s orcas are victims of the wildlife industry

Elephants are not the only victims of the tourist industry. The reality is, around the world, hundreds of thousands of animals are forced to perform and interact with humans every day. In Thailand, tigers are drugged so that travelers can take selfies and monkeys are dressed in outfits and taken out on leads in the hope that tourists will pay for a hold.

It would be naive to assume this is a problem exclusive to Asia. In the United States, SeaWorld’s orcas, dolphins, and seals perform in glass tanks for members of the public frequently. Despite the impact of 2013’s expose “Blackfish,” the animals who live in the marine park are still depressed, they are still sick, and SeaWorld continues to ignore the problem in the name of profit.

The story is similar in the Canary Islands, where many organizations offer the chance to get in the water and swim with dolphins – for a hefty fee. “Most people have good intentions when they go on excursions or visit parks that allow you to swim with dolphins,” says PETA. “But if they knew the truth behind the deceptive dolphin smile, they’d be horrified to know what they are actually supporting.”

The organization notes that in the wild, dolphins would usually swim around 60 miles every day, an unachievable feat in a concrete pool. “This is especially traumatic for them since they communicate through sonar,” says PETA.

It adds that captive dolphins are often housed in incompatible groups, leaving them at risk of injury from conflict with nowhere to escape. They also suffer from stress-related illnesses, including stomach ulcers.

The problem affects New Zealand as well. At the International Penguin Conference in New Zealand last August, experts voiced their concern over the popularity of selfies with wild animals, per the Guardian.

“The trouble with wildlife selfies is the images are often appearing without any context – so even if the message is promoting conservation or an ambassador programme, that message is lost and all people see are someone hugging a penguin, and want to do that too,” he said.

“We have an increasingly urbanised population around the world who are alienated from the natural world and whose access to wildlife is commodified and sanitised and made safe. So we’re seeing these very strange behaviours that seem weird to us as biologists – such as posing your child on a wild animal,” Seddon continued.

Some countries have taken a stand against wildlife selfies. Costa Rica recently launched a campaign against the practice. Tourists often travel to the country to see monkeys, sloths, toucans, and other wild animals, but sometimes they cross the line, says the Ministry of Environment and Energy.

Costa Rica is the first Central American to launch such a campaign, which is called Stop Animal Selfies.

The Ministry said in a statement, “the environmental and tourism sector come together to stop this practice and be an example in the world, motivating to avoid direct contact and selfies with wild animals in captivity or in their natural habitat when there is human manipulation.”

The Human Risk of Wildlife Tourism 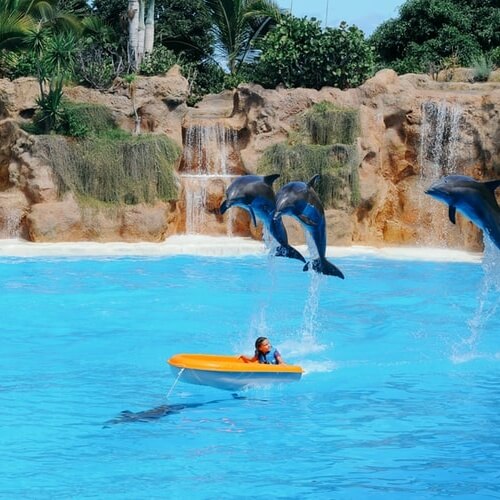 Keeping wild animals in captivity doesn’t just affect the animals themselves, but it has a human impact too.

PETA reports that captive dolphins can pass on illnesses to the humans that visit them, many of whom are children. There have been cases of the marine mammals passing on viral, fungal, and bacterial infections, including salmonella, and in some instances, people have had bones broken by animals thrashing around in swim sessions.

It gets more serious than broken bones, too. Tilikum — an orca who used to reside at SeaWorld, before his death in 2017 — killed three people, two of which were his own trainers. According to SeaWorld of Hurt, an anti-SeaWorld campaign led by PETA, Tilikum was aggressive and dangerous due to the way he was treated by humans since the age of two.

“He was torn from his mother and their ocean home and sent to the rundown marine park Sealand of the Pacific,” it explains. “Food was withheld from him as a training technique, and he endured attacks from the two dominant female orcas, whom he was forced to live with.”

Kardashian-West may be alarmed to discover that captive elephants have also seriously injured and killed people. In 2016, a tourist in Thailand was thrown from the back of an elephant after it suffered a random bout of rage, attempting to attack its owner. Big cats are a risk too. In 2014, a tiger in one of Thailand’s parks seriously mauled a visitor. 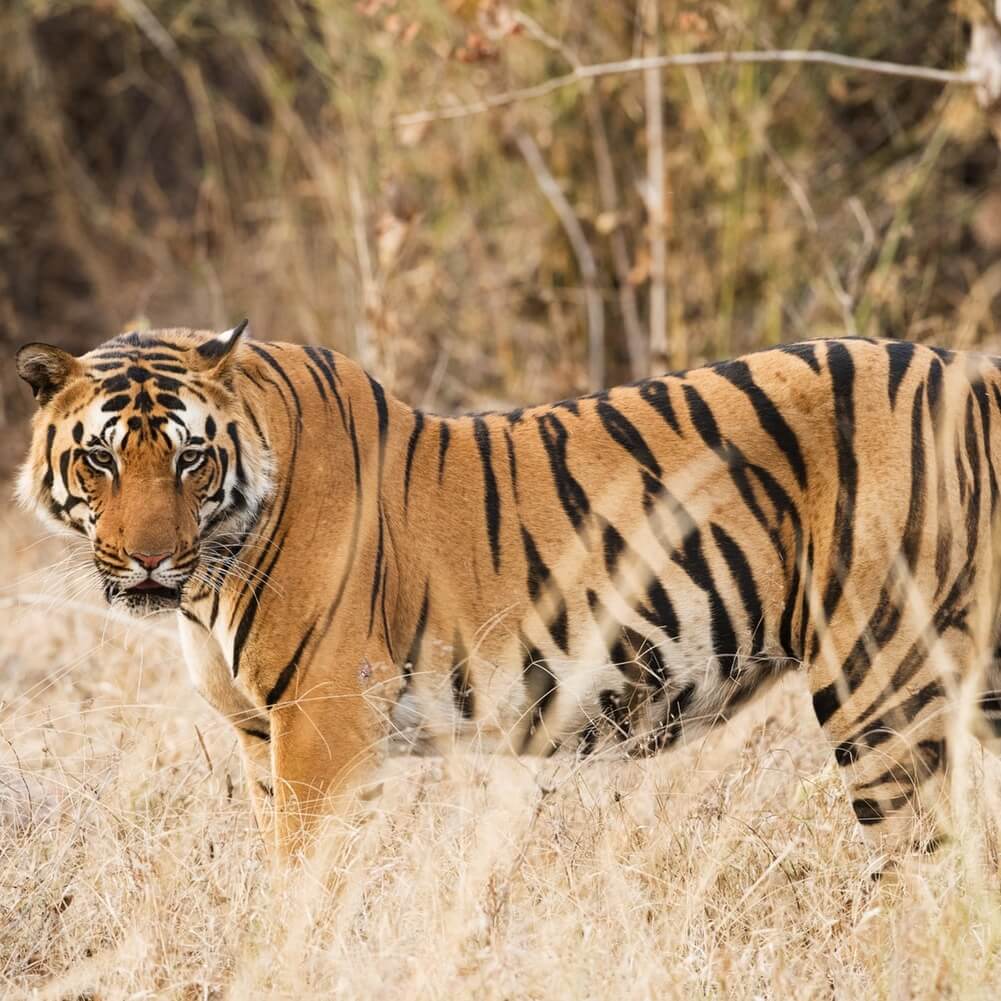 All of this might leave you feeling doubtful that ethical wildlife tourism exists, but there are a number of ways you can observe and learn about wild animals without harming them.

Responsible Travel supports a number of elephant sanctuaries around the world, from Elephant Nature Park in Chiang Mai, Thailand, to The David Sheldrick Wildlife Trust in Kenya, which looks after and rehabilitates orphaned elephants before releasing them back into the wild.

One of the best ways to practice ethical wildlife tourism is to observe animals in the wild from a distance. Tiger Country in India has nearly 50 tiger reserves where travelers can enjoy a safari.

“You must always remember that these are wild predators and that it is an extraordinary privilege to see these glorious and extremely rare big cats in the wild,” says Belinda Wright OBE, the executive director of the Wildlife Protection Society of India, on the responsible travel website. “Allow at least three or four days to increase your chances.”

If you’re not looking to travel across the world, ethical wildlife experiences can be found at home. Instead of zoos and aquariums, visit nature reserves, forests, and genuine sanctuaries for a chance of ethically spotting some wildlife.