As I’ve explored before, whether young or old, male or female, smoker or non-smoker, with high blood pressure or low blood pressure, high cholesterol or low, having high levels of a toxic compound called TMAO—trimethylamine oxide—in the bloodstream is associated with a significantly higher risk of having a heart attack, stroke, or dying over a three-year period. Where does TMAO come from? As I investigate in my video How to Develop a Healthy Gut Ecosystem, the choline in foods like eggs can be turned by gut bacteria into TMAO, which is then absorbed back into our system. And, the more eggs we eat, the higher the levels climb, as you can see at 0:41 in my video.

Given the similarity in structure between carnitine and choline, Cleveland Clinic researchers wondered if carnitine found in red meat, energy drinks, and supplements might also lead to TMAO production and put it to the test. As you can see at 1:00 in my video, if you feed omnivores, those who regularly eat meat, a steak, their TMAO levels shoot up. Those who eat strictly plant-based may start out with almost no TMAO in their system, presumably because they’re not eating any meat, eggs, or dairy. But, even if vegans eat a sirloin, still almost no TMAO is made. Why? Presumably, they don’t have steak-eating bacteria in their guts. Indeed, it was found that no TMAO is produced if you don’t have TMAO-producing bacteria in your gut. If you don’t regularly eat meat, then you’re not fostering the growth of the meat-eating microbes that produce TMAO. 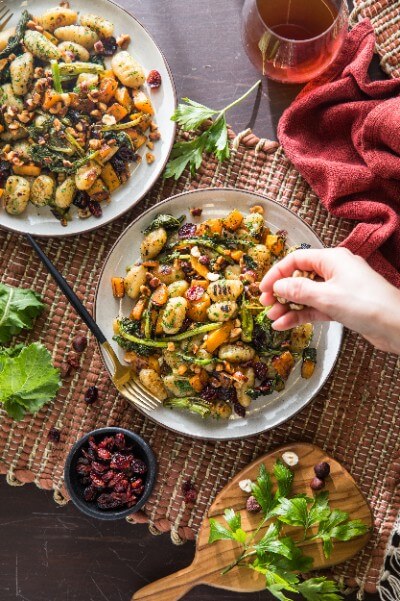 Feeding a Healthy (or Unhealthy) Gut

This suggests that once we develop a plant-based gut ecosystem, our bacteria will not produce TMAO, even if we eat meat every once and awhile. However, we still don’t know how rapidly gut bacteria shift after a shift in our diet—but it does not appear to be all or nothing. If men eating the standard American diet are given two sausage, egg, and cheese biscuits before and after just five days of eating lots of similarly high-fat meals, their TMAO production boosts even higher, as you can see at 2:09 in my video. So, it’s not just whether we have the bad bugs or not. Apparently, we can breed more of them the more we feed them.

Meat-free diets, on the other hand, can also have been “demonstrated to have a profound influence on human metabolism.”Just by analyzing a urine sample, we can tell what kind of diet people eat, based on measurements like how low TMAO levels are in the urine of those eating egg-free vegetarian diets, as you can see at 2:26 in my video. At 2:43 in my video, you’ll see that we can even take the same people rotate them through three different diets, and determine who is on a high-meat diet, low-meat diet, or no-meat diet, based in part on the different compounds churned out by the different gut flora or different flora activity after just about two weeks on the different diets. It’s possible that some of the beneficial effects of whole plant foods may be mediated by the effects they have on our gut bacteria. At the same time, the standard American diet may increase the relative abundance of undesirables that produce toxic compounds including TMAO (as you can see at 3:07 in my video).

Strictly plant-based diets have gained acceptance as a dietary strategy for preventing and managing disease. Perhaps, in part, this is because of their rather unique gut flora, with less of the disease-causing bacteria and more of the protective species. So, all along, we thought the reason those eating plant-based had lower heart disease rates was because they were eating less saturated fat and cholesterol, but maybe their lower TMAO levels may also be contributing to their benefits, thanks to their reduced ingestion of carnitine and choline.

I talked about the egg industry response to the choline revelation in Egg Industry Response to Choline and TMAO. How has the carnitine supplement industry reacted? In response to the research implicating carnitine in TMAO production, the former vice president of AdvoCare—a multilevel marketing company that sells carnitine supplements like AdvoCare Slam while getting slammed with lawsuits finding them guilty of being “engaged in false, misleading or deceptive acts or practices” and forced to pay more than a million dollars—questioned whether there was a secret vegan conspiracy at the Cleveland Clinic. Restricting our intake of meat or carnitine supplements to prevent our gut bacteria from making TMAO, he argued, is like trying to prevent car accidents by restricting the sale of fuel.

Okay…but there are benefits to transportation. We’re talking about TMAO, which may be fueling our epidemic of heart disease, the number-one killer of men and women in this country. As far as I’m concerned, the more we can cut the fuel for that, the better.

This article originally appeared on NutritionFacts.org

Michael Greger, M.D. FACLM, is a physician, New York Times bestselling author, and internationally recognized professional speaker on a number of important public health issues. Dr. Greger has lectured at the Conference on World Affairs, the National Institutes of Health, and the International Bird Flu Summit, testified before Congress, appeared on The Dr. Oz Show and The Colbert Report, and was invited as an expert witness in defense of Oprah Winfrey at the infamous “meat defamation” trial.