So far, the speaker lineup features vegan cycling champion and founder of Switch4Good, a nonprofit that advocates for athletes to ditch dairy, Dotsie Bausch, and Will Bulsiewicz, MD, vegan doctor and author of the upcoming book “Fiber Fueled.”

“We are two local ladies,” says the website. “A Vegan Olympian and a Veg-curious Maven who want to inspire you to get outside, be active, eat good food, connect with people, have fun and keep expanding your knowledge.”

The event won’t be aimed at just vegans. Anyone is welcome to attend Whistler Vegan Fest. 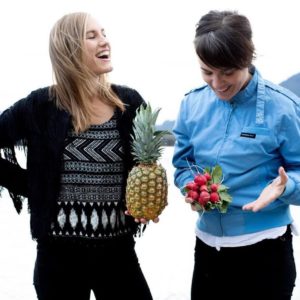 A vegan festival is coming to Whistler. | @whistlerveganfest

According to an Instagram post, the idea for the vegan festival was born while the pair, both Whistler residents, were on a hike in the mountains with their dogs.

Both Murray and Helleman are creatives in their own domains. Murray is a co-founder of 8020 Plants, a program that helps followers adopt a plant-forward diet as well as the blog Hooked on Plants. She is also a registered holistic nutritionist, certified plant-based chef, a vegan coach, and public speaker. According to Murray, getting people to eat more plants is her life’s passion.

Helleman, meanwhile, is a photographer, brand developer, and host of The Lawless Podcast. According to Instagram, Helleman is veg-curious, loves the outdoors, and “wants the Whistler Vegan Fest to be a platform for MORE people to get inspired to eat plants and get into the mountains.”

“With creativity, excitement, passion and the strong urge to create…the Fest has become an actual reality,” says the Whistler Vegan Fest Instagram.

Whistler Vegan Fest takes place outdoors in Rebalgiati Park at the shores of Fitzsimmons Creek, against the backdrop of Blackcomb Mountain in Whistler, BC. The event kicks off in June 2020. To learn more, visit the website.