Award-winning American musician and animal advocate Moby has been vegan since 1987. He regularly uses his platform to educate followers about animal rights and environmental issues. He is an influential figure in both electronic music and the vegan movement. But who is Moby, really? 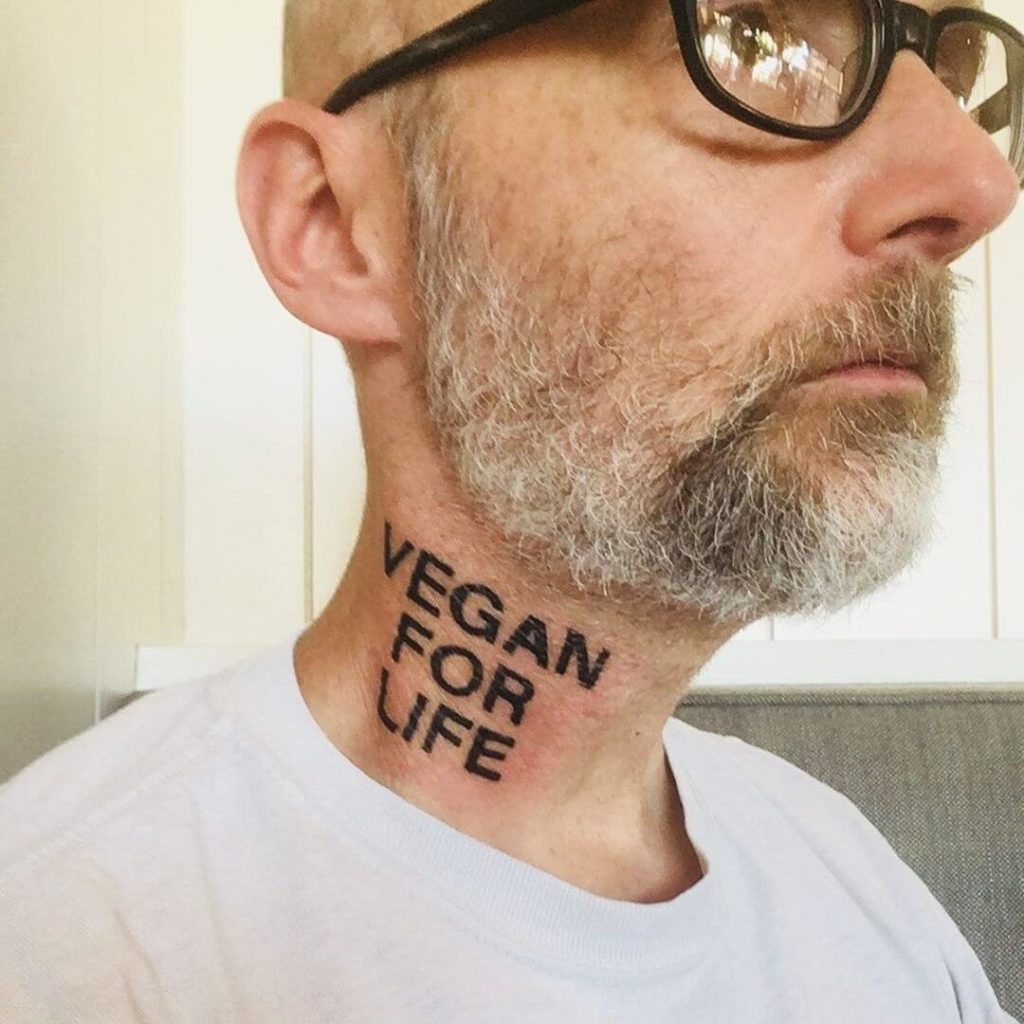 Born Richard Melville Hall in Harlem, Moby became one of the most important figures in 1990s dance music. The 54-year-old has sold over 20 million records worldwide.

Moby first gained international recognition with his fifth studio album, “Play” (1999). He helped to bring electronic music into the mainstream along with artists Fatboy Slim, The Prodigy, and the Chemical Brothers. Moby has also explored other genres and played in alternative-rock band Ultra Vivid Scene in the early 1990s. He released the divisive, punk-inspired album “Animal Rights” (1996) as Moby.

Prior to his career in electronic music, he performed with several underground hardcore and post-punk bands. In the 1980s Moby played in both the Vatican Commandos and AWOL.

Moby has been associated with several prominent figures from the ’80s hardcore punk scene; specifically, those who live the vegan straight-edge — alcohol and animal product-free — lifestyle. These include Ian MacKaye (Minor Threat), Toby Morse (H20), and Walter Schreifels (Youth of Today). Moby has been sober since 2008 and a vegan for nearly 36 years.

Earlier this year Moby got “Vegan for life” tattooed on his neck by fellow vegan artist Kat Von D. He has worked with celebrities and activists including Jane Goodall, Leonardo DiCaprio, Jaden Smith, and fellow musician Tony Kanal. Moby regularly calls on fans to get out and vote, go vegan, and to march for animal rights.

Moby recently expressed his support for Greta Thunberg and Jane Goodall on Instagram. He shared a photograph of the two environmentalists and added: “If these two phenomenal human beings are vegan, why isn’t everybody? For the climate, for the environment, for human health, and mainly; for the animals.” 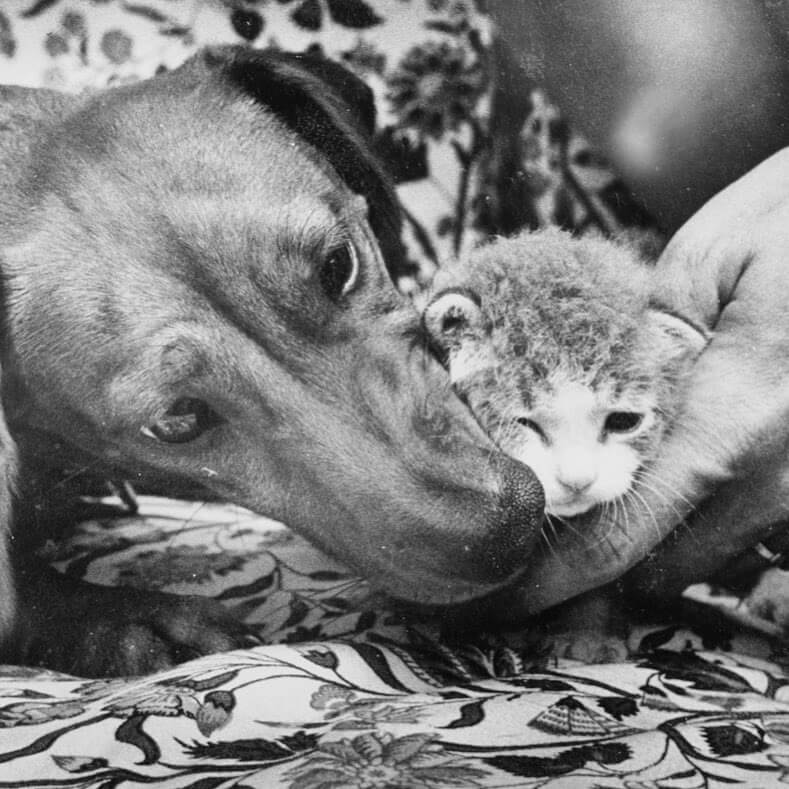 Why Is Moby Vegan?

Last year Moby gave a TEDx Talk at Venice Beach titled “Why I’m A  Vegan.” He talked about the relationship between his family dog George and their cat, Tucker. It was these family animals that first prompted the teenage Moby to have an “epiphany” about the reality of meat.

“It was 30 years ago today, Thanksgiving 1987, that I became a vegan. And Tucker, the tiny kitten pictured here, was the one who turned me from a McDonald’s eating suburban kid into a vegan,” said Moby.

Moby has talked extensively about his childhood relationship with animals and the cognitive dissonance of eating meat.

“I loved Tucker, and all of our rescued animals, unconditionally,” added Moby. “I embodied that strange human paradox: to love animals and also eat them.  Then one day, when I was 19 and Tucker was 10, he and I were playing and I had an epiphany.” 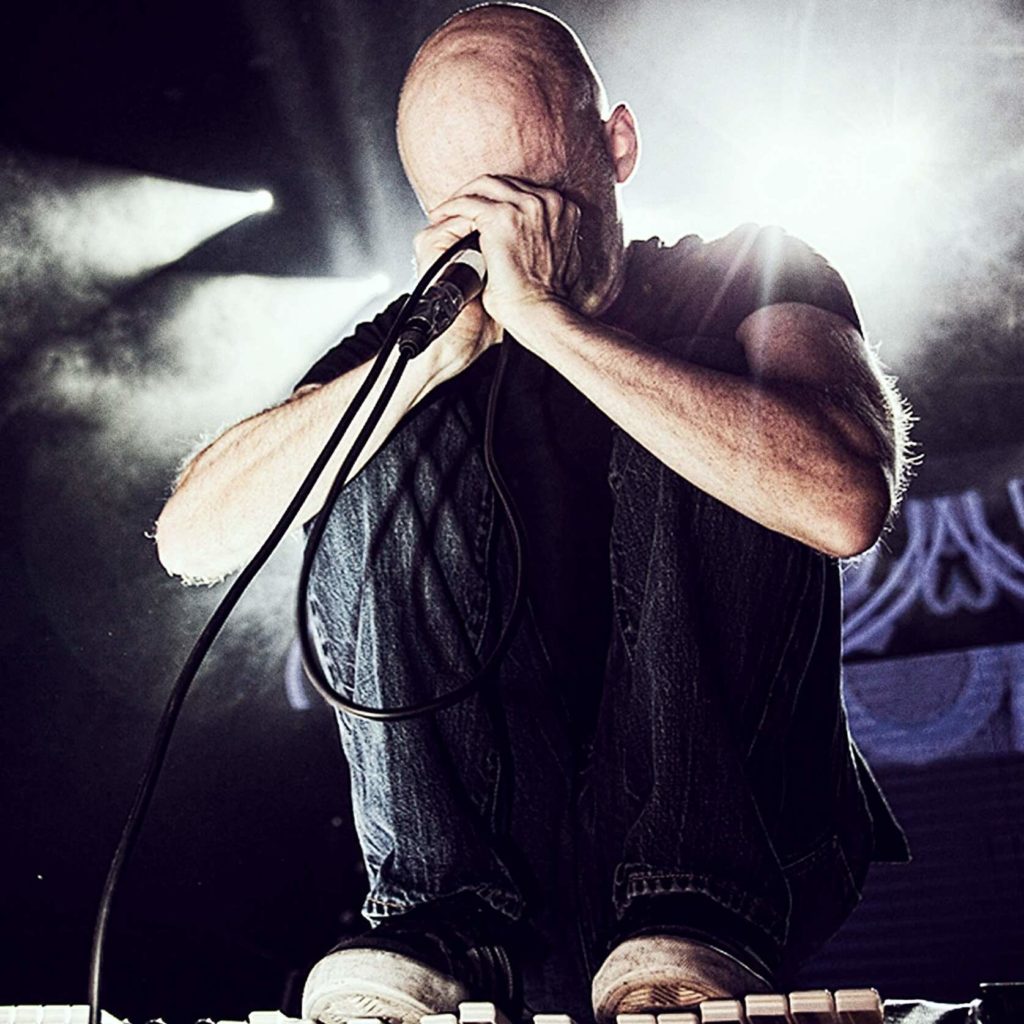 Moby donated 100 percent of the profits from his latest book to animal rights organizations.

How Has Moby Advanced Veganism?

Moby makes regular and significant donations to animal rights charities. He supports several organizations including PETA (People for the Ethical Treatment of Animals) and Mercy For Animals. He also owns Little Pine; a vegan restaurant founded Los Angeles as a plant-based community space and to raise funds for animal rights causes.

All profits from Moby’s latest book, “Then It Fell Apart” (2019) were also donated to various animal rights organizations causes. As were all profits from his latest album, “Everything is Beautiful and Nothing Hurt,” (2018) and accompanying live shows. Moby wrote on Instagram, “animal rights are more important to me than any small, selfish concerns I might have.”

In July 2018, Moby listed his $1.3 million New York home in order to donate all profits to animal rights and other charities, fund scholarships, and support political candidates. Earlier this year Moby sold off his own records and musical equipment and donated all proceeds to the Physicians Committee for Responsible Medicine (PCRM). It’s a nonprofit research and advocacy organization that is very vocal about the health benefits of eating a plant-based diet.

The Circle V Festival — which Moby organized with fellow vegan musician Kanal — made history at its inaugural event in 2016. The music and food festival included vegan talks and products in an inclusive and compassionate atmosphere. All profits were donated to animal protection charity Mercy For Animals.

“Circle V is the coming together of my life’s work, animal rights and music. I couldn’t be more excited about this event and am so proud to be headlining,” Moby said. 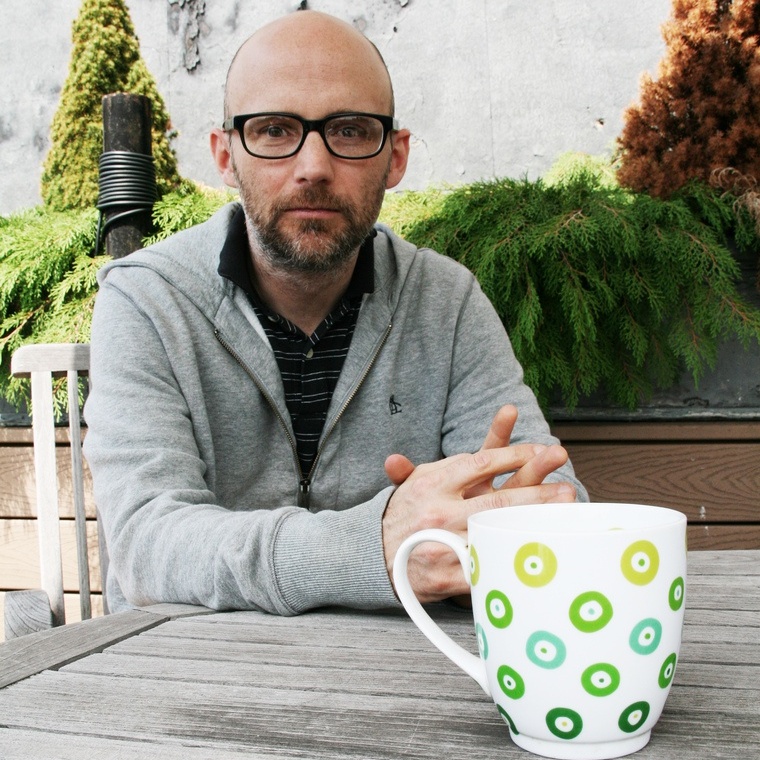 Moby says he is vegan for the planet, for human health, and for the animals ¦ Wikipedia Commons

What Has Moby Said About Veganism?

“I’m a vegan to reduce climate change, improve human health, end antibiotic resistance and rainforest deforestation, but ultimately I’m a vegan for the animals,” says Moby. “It’s my most deeply held belief; that every animal, human or not, is simply/basically/ineluctably entitled to their own life.”

Research indicates that adopting a vegan diet is the best way for individuals to mitigate the effects of climate change. Rising sea levels, extreme weather, and other effects of climate change are already impacting a huge number of people. According to data collected by Impossible Foods earlier this year, concern for the environment is now the third most popular motivator for purchasing plant-based meat. As Moby says, going vegan can help to reduce the catastrophic impact of the climate crisis.

Antibiotic resistance is another key reason to end animal agriculture. Academics estimate that nearly 80 percent of antibiotics are currently fed to livestock; not only to prevent and treat infections but also to enhance animal growth and get them to market weight faster. Increased exposure to antibiotics — such as those present in animal products — could mean that once easily treatable infections could become lethal. The Center for Disease Control and Prevention estimated that at least 23,000 people would die in 2018 from antibiotic-resistant infections such as MRSA or C. diff.

The Amazon Rainforest has been ravaged by recent fires, set by people looking to create space for cattle ranches. As Moby notes, deforestation is another increasingly popular motivator for consumers ditching meat. 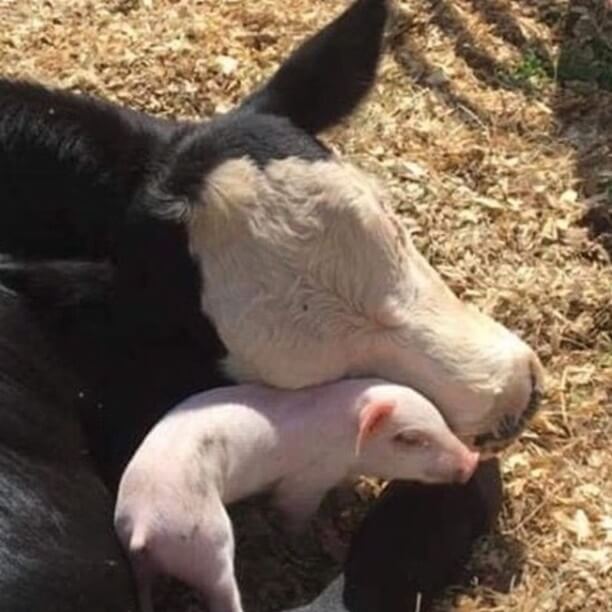 Moby says he is vegan for the planet, human health, and most importantly for the animals ¦ @moby

Vegan For the Animals

Nearly half the people who regularly buy vegan food say they do so for the animals. 98.3 percent of pigs are raised in factory farm conditions in the U.S. As are 70.4 percent of cows, 99.8 percent of turkeys, 98.2 percent of egg-laying hens, and 99.9 percent of chickens raised for meat. There is an ongoing, global conversation about the personhood of non-human animals, and The Australian Capital Territory (ACT) just became the first jurisdiction in Australia to recognize animals as sentient beings.

As Moby suggests, adopting a wholly plant-based diet can minimize your effect on the environment. It can also improve human health and increase the efficiency of food production. However, recent research by Health Research International revealed that 47 percent of all plant-based consumers do so for the animals. According to animal rights organization PETA, going vegan could save up to 100 sentient animal lives every year per person. 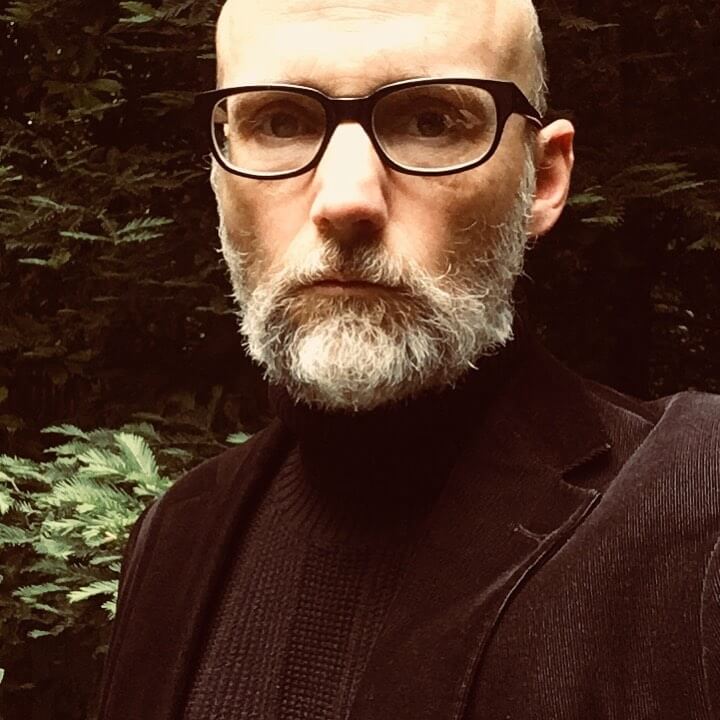 Why Does Moby Matter to the Vegan Movement?

Longtime vegans such as Moby help link the modern “movement” for plant-based food to veganism pre-boom. Moby’s consistent support for animal rights organizations and advocacy helps fund and support grassroots organizations such as Mercy For Animals. Moby sells his books, albums, possessions, and even vegan food to fund such projects.

Moby regularly reaches out to his 387 thousand followers on Instagram to raise awareness of animal rights issues and causes. He is vocal in his support of other activists and environmentalists and often talks about speciesism and the roots of his veganism. Compassion, love, and an egalitarian view of other animals are what motivates his advocacy.