Activists are urging the World Health Organization (WHO) to call for a ban on live animal markets amid the coronavirus outbreak.

A petition has emerged online, asking the WHO to call for an end to live animal markets because they are a breeding ground for harmful, zoonotic diseases. Zoonotic diseases, like the coronavirus, are able to jump the species barrier from animals to humans.

Other examples of zoonotic diseases include SARS, Ebola, and swine flu.

The petition—started by international animal rights group PETA (People for the Ethical Treatment of Animals)—currently has more than 54,000 signatures.

The accompanying letter reads: “COVID-19 and SARS have taught us that immediately closing off these sources of infectious diseases is an absolute necessity—and doing so will help prevent future outbreaks since live animal markets provide diseases with the perfect opportunity to spread from other animals to humans.”

“Please use your authority to urge governments to order the closure of all live animal meat markets,” it continues. Live animal markets are present in several countries outside China, including the U.S. 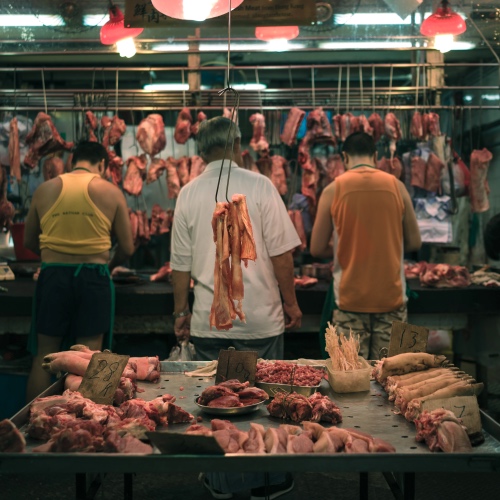 A petition is urging the WHO to ban live-animal meat markets.

The Threat From Live Animal Markets

There are currently more than 860,000 total cases of coronavirus around the world. More than 42,000 people have died and more than 178,000 have recovered.

The COVID-19 (novel coronavirus) outbreak is believed to have originated from a wet market in Wuhan, China last December. Wet markets sell live and dead fish and wild animals, such as snakes and bats, for human consumption.

Experts have speculated as to which animal is responsible for transferring the virus to humans—suggesting pangolins and snakes. The WHO revealed bats are likely the cause.

“From phylogenetics analyses undertaken with available full genome sequences, bats appear to be the reservoir of COVID-19 virus, but the intermediate host(s) has not yet been identified,” the WHO revealed in a report released last month.

Leo Poon, a virologist professor at Hong Kong University, told CNN there is always a danger that viral outbreaks could occur in wet markets because animals are kept in unsanitary living conditions in close proximity.

“These animals have their own viruses,” Poon said. “These viruses can jump from one species to another species, then that species may become an amplifier, which increases the amount of virus in the wet market substantially.”

Prior to the outbreak, the Guardian reported there were an estimated 20,000 wildlife farms and markets in China. They bred animals like peacocks, porcupines, and pangolins. Last month, China banned the wild animal meat trade in order to reduce the spread of the virus. Vietnam is considering a similar ban.