Whole Foods Market just launched its own vegan ice cream via its 365 Everyday Value line. These new dairy-free desserts were released just before the weekend, rolling out to select southern California stores in a soft launch phase.

A LIVEKINDLY reporter noticed the new products during a stroll down the ice cream aisle. The pints were tucked away on the bottom shelf. When asked about the sudden appearance of this new line, a store manager said, “We just got them in a few days ago, right before the weekend…they’re very new.”

The pints are so new that no further information could be obtained regarding the distribution to other stores. A few calls to the Whole Foods regional office confirmed that they are currently available in the greater Los Angeles and Orange County areas, but it is unknown if other regions stock the product yet. Further, the pints are not yet available for online delivery or marketed on any of the Whole Foods social accounts. 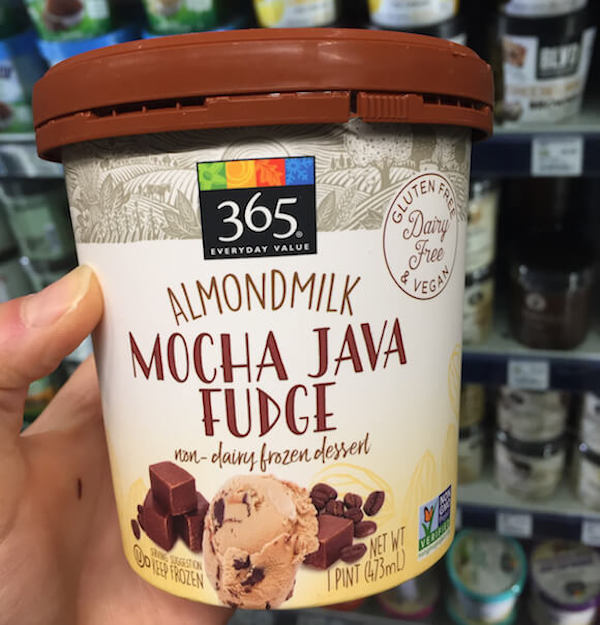 However, the company did not hold back in regard to its flavor offerings. Unlike some brands that tend to release just a handful of crowd-pleasing favorites for the first round, Whole Foods developed and shelved an impressive lineup of seven flavors. Options include Vanilla Bean, Chocolate, Berry Chantilly Cake, Mint Chocolate Chip, Chocolate Chip Peanut Butter Swirl, Coconut Almond Bliss, and Mocha Java Fudge. All flavors are almond milk-based, dairy-free, gluten-free, and non-GMO.

Whole Foods’ move to create its own line of vegan ice creams resonates with the current consumer demand for plant-based products. Ice cream, specifically, has seen an enormous growth in its plant-based equivalents. There are exclusively vegan brands that make quality vegan frozen desserts, but there has also been a major shift in dairy companies who have decided to offer non-dairy versions of their best-selling flavors. Ben & Jerrys ignited this trend in 2016, but since then a plethora of brands have followed suit, including Halo Top, McConnell’s, Jeni’s Splendid Ice Creams, and Haagen Dazs. Another popular health food store, Sprouts, has also developed its own brand of vegan coconut milk ice creams.

With summer just around the corner and seven new non-dairy pints at Whole Foods, there will be plenty of vegan ice cream options to choose from.