Whole Foods Market is set to release its first cookbook since 2002. Delish reports that the new plant-forward cookbook, called “The Whole Foods Cookbook: 120 Delicious and Healthy Plant-Centered Recipes,” is written by co-CEO and co-founder John Mackey and features recipes from “Wicked Healthy” vegan chefs and brothers Derek and Chad Sarno.

The new cookbook offers recipes for breakfast, lunch, dinner, and more, all made from mostly vegan recipes that showcase the versatility of plants. Recipes include Roasted Eggplant With Cashew Cheese, Roasted Spiced Cauliflower, Indian Chickpeas, and Vibrant Veggie Gado Gado. The book’s mission is to help ease veg-curious consumers into learning how to cook flavorful plant-based dishes.

“The ultimate goal of ‘The Whole Foods Cookbook’ is to change your habits around eating and preparing food,” reads the cookbook description.“In the midst of our busy lives, the last thing most of us need is an overly complicated diet. Get the basics right, learn to cook a few meals you love, and eat plenty of them. Once you become accustomed to the whole foods, plant-based lifestyle, you’ll quickly gain the confidence to create your own delicious variations.” 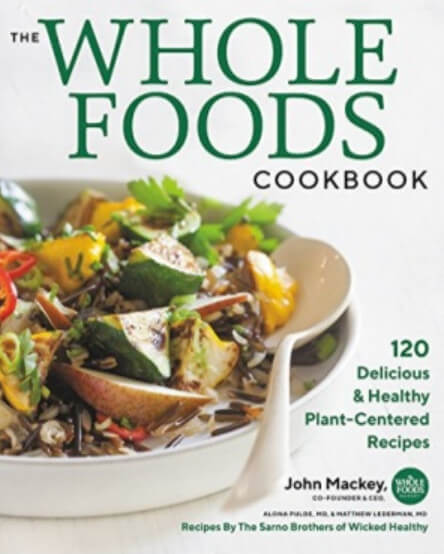 Dr. Alona Pulde and Dr. Matthew Lederman, health and wellness medical experts for Whole Foods, co-wrote the book with Mackey. The trio previously worked on Mackey’s 2017 book, “The Whole Foods Diet: The Lifesaving Plan for Health and Longevity,” which detailed the health benefits of a whole foods, plant-based diet, or a vegan diet that excludes excess refined oils, sugars, and processed foods.

In May, the Sarnos released their own vegan cookbook, “The Wicked Healthy Cookbook: Free. From. Animals.” The pair are also part of the culinary team behind emerging vegan seafood brand, Good Catch Foods, which makes realistic, high-protein plant-based tuna fish and other seafood dishes. In early September, Derek revealed that he and Chad are also working on developing a line of vegan meat made from mushrooms called “Wicked Meaty.”

The new Whole Foods Market cookbook will be released on October 30.