Whole Foods’ private label line “365” underwent a makeover following Amazon’s acquisition of the grocery chain in 2017. According to Forbes, instead of being a stand-alone brand, 365 is now “formally endorsed by Whole Foods Market.”

The new 365 logo and packaging reflects this change. The former logo included the phrase “Everyday Value.” It has now been replaced with “Whole Foods Market.”

Following the acquisition, Amazon said in a statement that it planned to “lower prices without compromising Whole Foods Market’s long-held commitment.”

In a statement last year, Whole Foods’ founder John Mackey explained the reason for the new logo. He said: “As we have been consistently lowering prices in our core Whole Foods Market stores over the past year, the price distinction between the two brands (365 and Whole Foods Market) has become less relevant.”

He continued: “As the company continues to focus on lowering prices over time, we believe that the price gap will further diminish. As a result, we have decided that it’s in the best long-term interest of the company to concentrate our efforts on growing the core Whole Foods Market brand moving forward.”

Whole Foods has also revamped its other 365 products, including its plant-based breakfast patties. 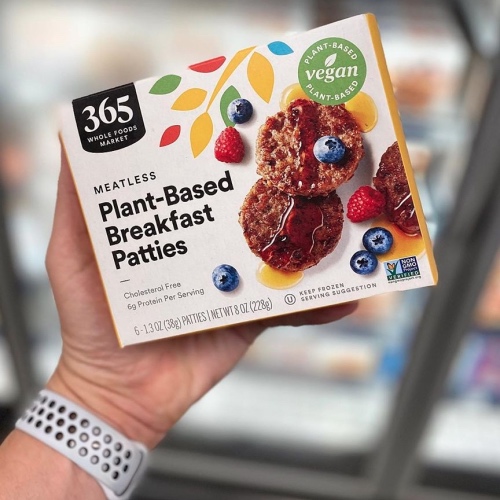 Whole Foods recently announced it would be launching Upton’s Naturals’ banana blossoms—a popular plant-based alternative for fish—nationwide this May.

Banana blossoms are a popular ingredient in Asian cuisine. The fleshy, tear-dropped shaped purple flowers grow at the ends of banana fruit clusters. “It has a light, delicate, flaky texture like fish, and works really well breaded and fried as a fish alternative,” Dan Staackmann, Upton’s Naturals’ founder, told FoodNavigator-USA.