Travelers on U.S.-originating flights at Heathrow Airport were met with pumpkin pies this morning in celebration of Thanksgiving. The festive greeting included vegan pumpkin pie, too, all courtesy of Whole Foods Market.

Slices of pumpkin pie were handed out by “baggage ambassadors” while screens throughout the Heathrow Terminal 5 read “Happy Thanksgiving.” According to the press release, the many from the 200,000 strong American expat community in the UK still enjoy celebrating Thanksgiving.

Whole Foods brings back its pumpkin pie around this time each year. The supermarket describes it as being “every bit as scruptious as a classic pumpkin pie. Pureed spicy pumpkin with coconut cream and maple syrup baked in an almond and cornmeal crust.”

“Thanksgiving is the busiest time of year for our seven UK grocery stores, as American expats seek out the tastes and traditions of home. And while turkey might get first billing on the day, we know that it’s just not an American Thanksgiving without pie,” Jade Hoai, Director of Purchasing and Operations for Whole Foods Market UK, said in a statement. “Partnering with the iconic Heathrow to bring the spirit of the day to their travelers has been a great experience for our team.” 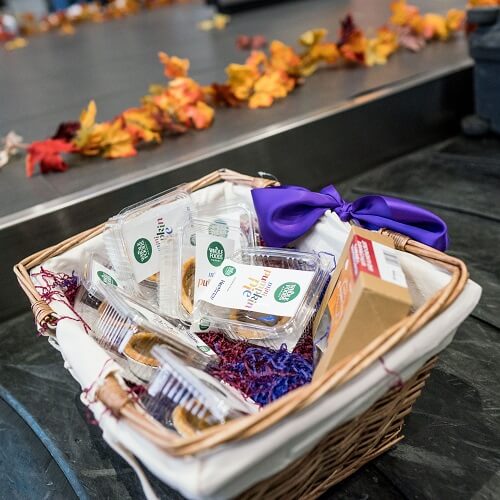 Baskets of pumpkin pies were placed on the luggage carousel. | Heathrow

Several UK supermarkets have vegan festive menus, main course and all. Tesco, Sainsbury’s, Waitrose, Asda, Aldi, Morrisons, Iceland, and Marks & Spencer have all announced vegan Christmas ranges. Many have also launched own-brand vegan Christmas sandwiches in celebration of the festive season, including Starbucks. Consumer interest in vegan food is on the rise in the UK. According to Mintel data, the nation launched the most new vegan food products in the world last year.