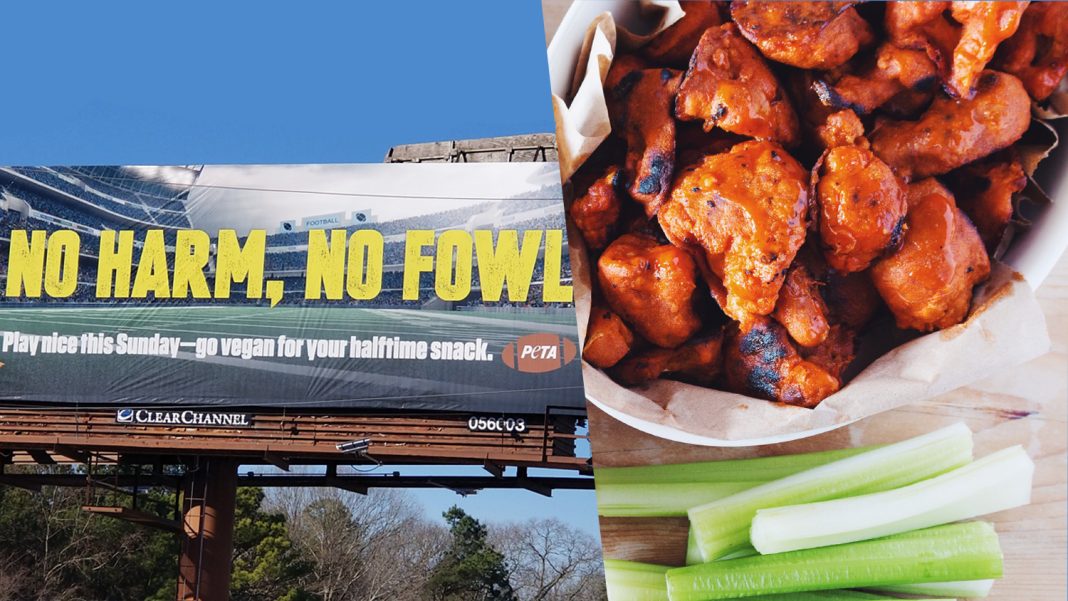 A billboard has arrived outside of meaty Atlanta restaurant American Wings & Seafood ahead of Sunday’s Super Bowl urging football fans to go vegan.

The Super Bowl is the second-largest day for U.S. food consumption, after Thanksgiving, and traditionally sees NFL fans tucking into chicken wings, nachos, and pizza.

The billboard features an endearing chick playing football alongside the words: “No harm, no fowl. Play nice this Sunday – go vegan for your halftime snack.”

The billboard was erected by People for the Ethical Treatment of Animals (PETA), the largest animal rights organization in the world. Speaking about the campaign, Ingrid Newkirk, PETA President, said in a statement, “Chickens are wonderful, gentle birds, yet last year, hundreds of millions of them were killed for Super Bowl snacks alone.”

The organization has also funded a mobile billboard – which reads “Go the Extra Yard. Go, Go, Go Vegan!” – to circle the stadium and be driven downtown. A costumed chicken mascot will hand out free vegan wings from Cafe Sunflower in Atlanta to passersby and an airplane will fly overhead with a trailing banner that reads, “Let Chickens Keep Their Wings: Go Vegan.”

As well as Cafe Sunflower, Atlanta restaurants including Green Sprout, Envegan, and Soul Vegetarian No. 2 will serve up plant-based wings and other vegan Super Bowl-style snacks for the occasion.

Vegan Athletes Kicking Up a Storm

But it’s not just fans who are eating more vegan game day food. A growing number of NFL players are turning to plant-based protein.

Derrick Morgan, a linebacker for the Tennessee Titans, and his wife, chef Charity, also follow a vegan diet. The pair even inspired other members of the Titans – like Brian Orakpo, Jurrell Casey, and DaQuan Jones – to do the same.