Updated 06.22.20 – Vegan athlete and podcaster Johanna Jahnke has created space for herself in two separate, major sports. First as a rugby player, then as a competitive cyclist—all while balancing being a single parent, working, and studying.

Jahnke lives in Hamburg, Germany, and has been vegan for almost 20 years. “I grew up almost vegetarian,” says the 37-year-old mother of two. “My family had almost no meat just because they were really conscious about healthy foods. We just ate very conscious.”

She became a full vegetarian when she was 12 and felt that she was doing enough by “not killing animals.” At 17, she studied abroad in New Zealand as an exchange student. When she returned, she made some big life changes.

“Shortly before I had moved to New Zealand my father died from lung cancer. So I went away for a year and came back, and I was in the kind of space where I was really open for changing things,” says Jahnke.

“I was still a vegetarian, and my Mum wanted to change the food in her kindergarten to vegetarian food,” continues Jahnke. “She gave me one of the PETA leaflets, the Vegetarian Starter Kit, and it was basically a vegan starter kit. I read through it, and said ‘OK: I have to become vegan.’ Being vegetarian is not enough.”

Jahnke says she realized that boycotting meat still meant supporting calf slaughter through dairy products. “I was like ‘why haven’t I thought about this earlier?’ You have to be vegan if you don’t want to harm animals, or humans, or anything. You have to be vegan to do as little harm as possible,” she adds. 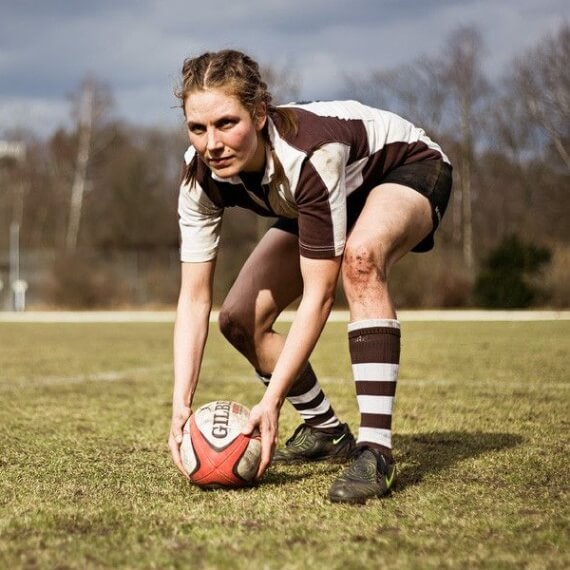 Before getting into cycling in 2014, Jahnke enjoyed a successful rugby career. She started playing rugby when she was 11 and began competing internationally in her late teens. St Pauli, her club team, is particularly well known in the soccer scene for its anti-fascist work.

At 17 Jahnke became a member of the German national rugby team and played her first European cup aged 18. She captained FC St. Pauli on two occasions, represented Germany internationally, and played in the 2002 World Cup. She has also competed in Australia and New Zealand and helped win a Swedish championship in 2004.

“I could show people that it’s possible to do a sport like rugby. To weigh 80 kilos with muscles and everything and still be vegan. So that was really cool,” says Jahnke.

Around this time, she was approached by People for the Ethical Treatment of Animals (PETA) to create a postcard. Jahnke says she found that her success in sports was an effective way of showing it is possible to be a healthy vegan. “People still don’t think it’s possible,” she says.

Jahnke remembers the reactions of interviewers at the time, who were surprised at her physical appearance. “All the prejudices about building up muscle, and then a woman stands there and she is double as big as you are,” she laughs.

Jahnke retired from international rugby in 2005 after 24 appearances when she became pregnant. “It was really hard for me to be in a team,” she explains. “You can’t do rugby 50 percent, you have to do it 100 percent.” 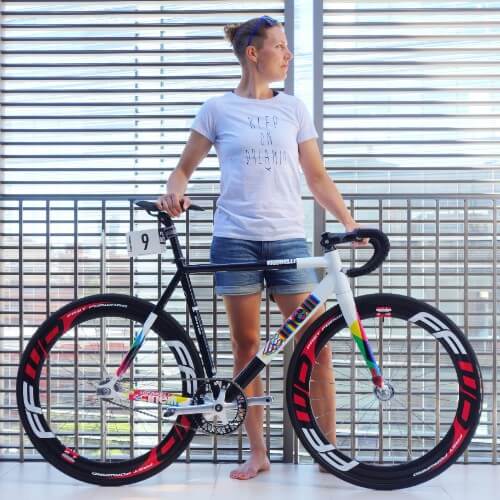 Jahnke says that the strength she built up playing rugby professionally translated well into cycling power. However, a career in cycling wasn’t something that she had planned at the time. Jahnke says that she has never owned a car, and has always used cycling as her primary means of transportation.

Around six years ago, she bought a road bike in order to have some time away from the city. She began taking short trips and exploring the world of bikepacking. Shortly after buying a road bike, Jahnke got involved in Hamburg’s thriving fixed gear scene. 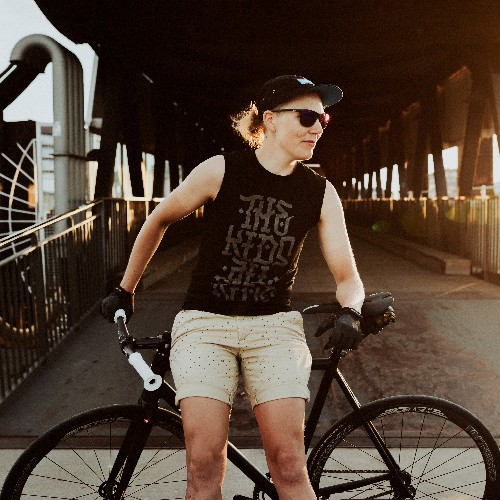 For Jahnke, part of the appeal of the fixie community was its alternative style—including plenty of vegan riders and the availability of plant-based food at races. The first race she ever entered was a 200-meter sprint, in which she came first.

“All I had to do was ride 100 percent for 200 meters,” explains Jahnke. “As you can imagine, this is exactly what you can do if you’re a rugby player. I just had to make sure to brake in time, because there was a wall!”

Jahnke then entered the Red Hook Crit series, a fixed gear circuit made up of “nice people” with “similar mindsets.” She says: “There was always vegan food, and that was new.” When she first started riding, Jahnke reiterates, she didn’t plan on competing. But after just one month, she had entered—and won—her first race.

“I did that for four or five years, and two years ago a similar thing happened,” she continues. “I didn’t feel like traveling around the world for a 40-minute race anymore. So I thought I would rather bike four thousand kilometers across my own continent.” 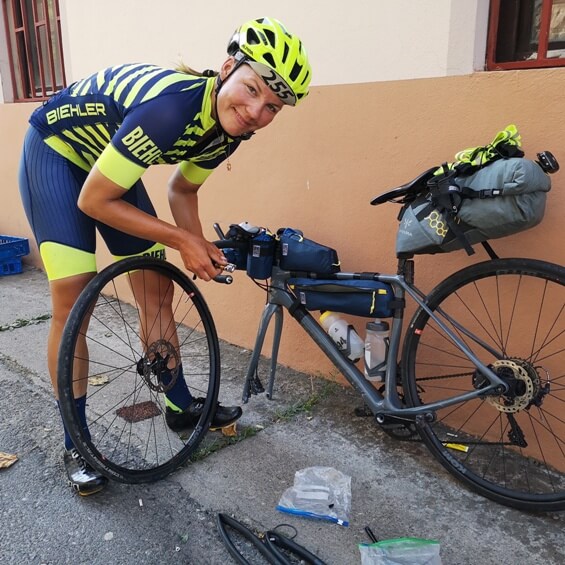 Jahnke and her teammate became the first women to complete the Transcontinental Race within the time limit in 2018.

The Transcontinental Race (TCR) is an annual ultra-endurance cycling competition across Europe. It was founded as an accessible alternative to other ultra-endurance races, which often require large amounts of money to enter.

In 2018, Jahnke and her cycling partner Marion Dziwnik became the first women to officially finish the Transcontinental Race within the time limit. Jahnke adds, however, that it is always an accomplishment to “ride all the way to the end.”

When they first applied for the race, Jahnke says that neither her nor Dziwnik had placing high in mind. “We just wanted to do it,” she continues. “But then we realized that no female rider had ever done it. I was pushed by the thought that we could set an example here and we could write history.”

During the race, riders are entirely self-supported. While the route and distance vary yearly, it is usually between 3,200 and 4,200 km and takes, on average, between seven and 10 days. It is widely known as one of the toughest cycling endurance competitions in the world.

“We came third out of all the teams, so we were quite fast,” adds Jahnke. “It doesn’t matter so much, but it’s cool if you tell someone and they can kind of put it into relation; our efforts.”

Diet is particularly important in ultra-cycling, especially during endurance tests such as the Transcontinental Race. Jahnke jokes that this kind of racing is also an eating competition; “Because if you eat enough, you’re fine. If you don’t, you get in trouble.”

“On the longer, multi-day rides, I do a lot with dried fruit and nuts and make sure I take enough carbohydrates. And on the road, you can easily order pizza without cheese. Just make sure you eat a lot,” she adds. 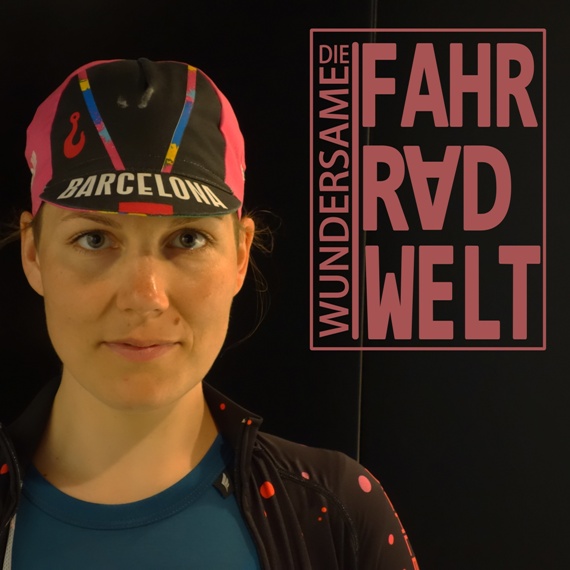 Thanks to her reputation in the worlds of both fixed-gear crits and ultra racing, Jahnke has interviewed a wide variety of notable figures from the global cycling community. These include 2019’s Transcontinental winner Fiona Kolbinger—the first woman ever to win the race.

While The Wondrous Cycling World is a cycling podcast rather than a vegan podcast, Jahnke says she has managed to regularly incorporate her veganism into the project. She recently interviewed her first vegan pro-cyclist, Simon Geschke.

“I was really happy about that,” she says. “Thinking back, I’ve always wanted to do a blog and write about it and tell people and help people. But I never really had the energy to do it.”

Between working, studying, sports, and her two children, Jahnke says she never really had time to sit down and write. “I like talking,” she says. “I never write long articles but I can do a two-hour interview.”

Jahnke concludes: “I have always been a vegan athlete, and now, through the podcast, I have the chance to finally produce content. And for me, it works.”