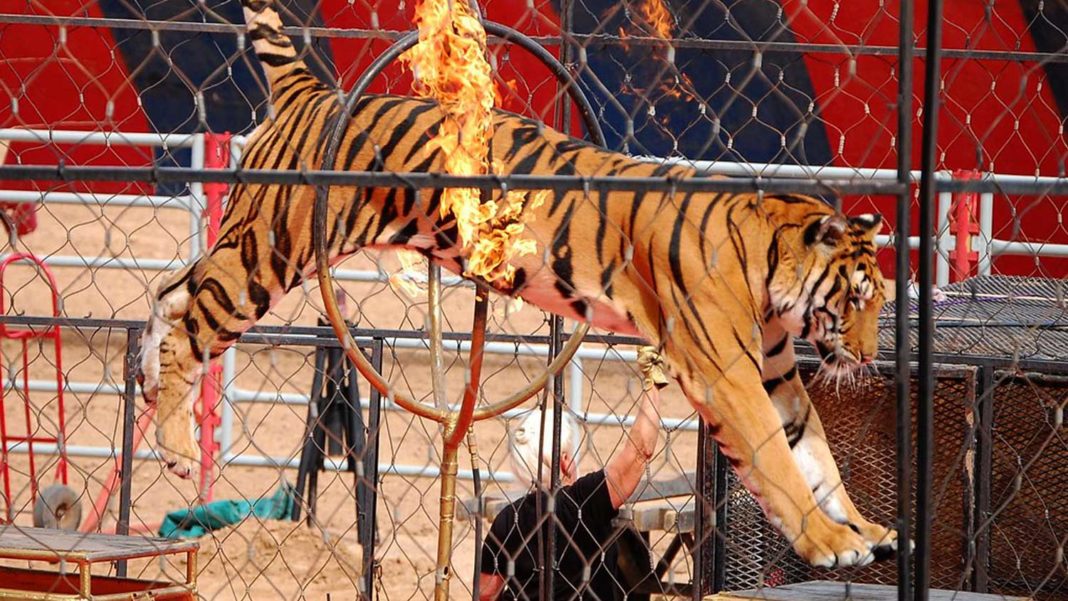 Updated October 12, 2019. | California just banned the use of wild animals in circuses. It joins Hawaii, New Jersey, and New York City in prohibiting circuses from using wild animals as entertainment.

Bill SB 313 — which was authored by Senator Ben Hueso and co-sponsored and supported by a number of animal rights groups — was signed into law by Governor Gavin Newsom today.

The bill applies to most animals. Domestic dogs, cats, and horses are exempt. It includes a $25,000 penalty per day for each violation.

PETA (People for the Ethical Treatment of Animals) co-sponsored the bill, alongside Social Compassion in Legislation. Animal Defenders International (ADI) supported the bill.

She added, “they don’t belong on a carnival midway, and they’re not willing participants in circuses, so PETA looks forward to seeing Sen. Ben Hueso’s bill become law and the days of dragging beleaguered camels and caged tigers across California come to an end.”

At least two circuses that use animals were scheduled to perform in California this year, the Washington Post reports.

Banning Wild Animals in Circuses Across the U.S.

Circus animal suffering could soon come to a complete end in the United States.

A bill that bans the use of wild animals in traveling circuses was introduced in Congress earlier this year.

The measure — called the Traveling Exotic Animal and Public Safety Protection Act (TEAPSPA) — was presented to the House of Representatives.

The bill would amend the Animal Welfare Act — a law that has monitored human treatment of animals in research, transport, entertainment, and more since 1966.

The bill’s website explains the “adverse effects” of captivity and transport on animals used for entertainment. “Due to severe confinement, lack of free exercise, and the restriction of natural behaviors, animals used in traveling circuses suffer and are prone to health, behavioral, and psychological problems,” it explains.

It is common for circus staff to mistreat animals by using bullhooks, whips, electric prods, and metal bars, which many “would view as torturous,” TEAPSPA says.

It adds that law enforcement authorities struggle to monitor circuses effectively due to their mobility, meaning the “brutality” faced by animals often goes undocumented. “Congress has a responsibility to protect the welfare of animals and ensure public safety,” the website states.

A ban on exotic animal involvement in circuses would also benefit the economy, according to TEAPSPA, which calls it the “least expensive solution to this problem.” It points out that between 2007 and 2010, the USDA inspected Carson & Barnes Circus 42 times, spending a total of $57,246 in doing so.

TEAPSPA adds that the financial burden of the issue often falls in taxpayers’ laps. “The US taxpayer effectively pays for 87% of the licensing costs whereas the circus only pays 13%,” it says.

According to TEAPSPA, a wild animal circus ban is “cleaner, less costly, and more easily enforced” compared to current regulations.

Arizona Representatives Raúl Grijalva and David Schweikert sponsored bill. Jan Creamer, the founder and president of ADI, is another sponsor. According to ADI, 20 animal protection groups back the bill including Big Cat Rescue and Chimpanzee Sanctuary Northwest.

English actor, director, and vegetarian Ricky Gervais has shown his support for the measure. “Animals have their spirits broken, beaten out of them, in order to entertain humans in circuses. It is heartbreakingly cruel and humiliating; it belongs to our ignorant past,” he said. “TEAPSPA will bring an end to this suffering.”