After making headlines recently regarding his dramatic weight loss and improved health following the adoption of a plant based diet, Black Eyed Peas lead and the Voice judge Will.i.am has now shared his own voice on the matter. (Well, Tweet) 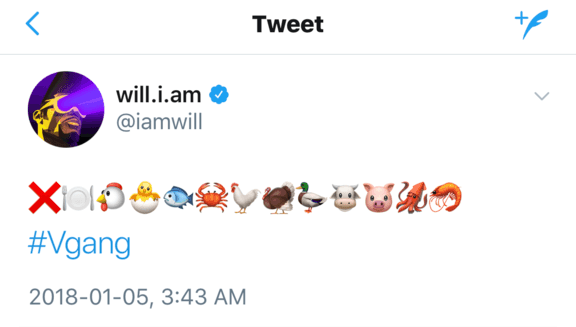 Will ended the Tweet with a ‘#Vgang’, a term (and now part of the Ethcs clothing brand) created by ethical vegan athlete Timothy Shieff.

Although it was reported that Will.i.am reported that became vegan for health, his nod to such a variety of (emoji) animals and ethical vegan group suggests that this Black Eyed Pea has bigger concerns than protein.

Will.i.am is already known for his compassion for humans and is an avid supporter of many social justice causes. He even launched his own charity to help families on the brink of losing their homes.

And it makes you think —  with all that’s going on in the world right now, isn’t it about time we made kindness cool again? The man once even said it himself: “There are five issues that make a fist of a hand that can knock America out cold. They’re lack of jobs, obesity, diabetes, homelessness, and lack of good education.”