Funky Fields, the makers of this mince, took to its Facebook page to share a promotional video about the new product. The clip teased, “Get ready for the biggest food revolution since sliced bread!”

“We once thought that that tasty lasagna, those delicious meatballs, and the burger, ooh the burger, were only for the meat-eaters. [We thought] that the tacos, the burritos, and the chili con carne were something we could only dream about,” the video said in the narration.

“Let’s change that. Let’s own that tasty lasagna, and make those delicious meatballs ours. And of course, the burger. Oooh yes, the burgers. Invite your friends over to celebrate nature and taste at the same time! Because we once thought that meat only came from animals. Those times are over,” the narration continues.

The mince is the first vegan meat product from Funky Fields, which just entered the market with it’s plant-based butter (Woolworths has carried the butter since May). The company’s move to release innovative new vegan products is set to disrupt all categories it touches by challenging conventional animal products with strikingly similar, plant-based alternatives. It’s already made waves in the butter section by churning out a sustainable spread, and the company hopes to duplicate this success with its new vegan meat offering.

Food Frontier, a DGR-endorsed non-profit that “activates, accelerates and advocates healthier, more sustainable protein innovations – like plant-based and clean meat – across the Asia Pacific region,” shared its support for the new meat, also via Facebook. It pinned a post of the packaged mince to the top of its Facebook page and encouraged Australians to purchase the mince. 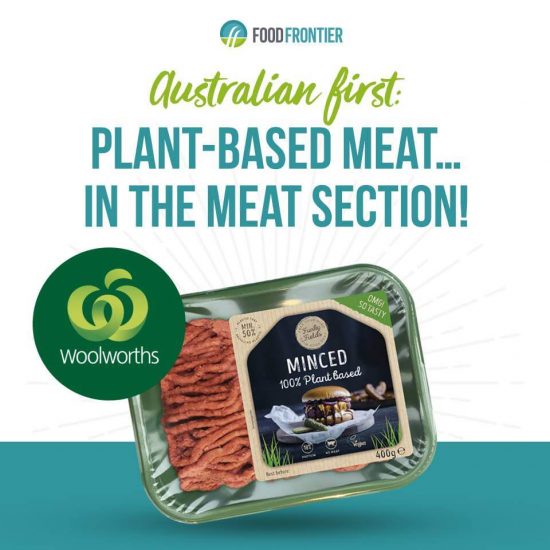 Although all its products are vegan, Funky Fields is likely to see a strong demand from omnivore consumers. Recently, news website Financial Review reported that “carnivores” are driving the “surge in vegan menus” in Australia. Further, research released by a PCRM representative claimed plant-based meat products, such as the new mince, help people transition to vegan diets.

The vegan mince enters the market at a crucial time, as vegetarian and vegan meals are reached the tipping point and are now widely accepted by the mainstream. So much so, Australia’s Burger King fast-food franchise, Hungry Jacks, recently launched a vegan burger, bun and all. The Australian market is particularly receptive to these new vegan products, for the nation ranks as the world’s third-fastest growing vegan population.