Globally Local, the fast-food chain behind the world’s first 24-hour vegan drive-tru, is opening its first Toronto location. The plant-powered menu includes vegan takes on fast-food classics like the Big Mac, the Whopper, and all-day breakfast.

The vegan fast-food chain revealed its newest location on Instagram last week. “TORONTO HERE WE COME,” the announcement said. “We are super excited to announce that our Toronto location is opening this Summer – located at 492 College St (near Bathurst).”

Globally Local is behind Canada’s first 24-hour vegan drive-thru, which opened in London, Ontario in June 2017 following the success of its sit-down restaurant. The latest location will seat 35 guests and while it’s not 24-hours, it will be open late. 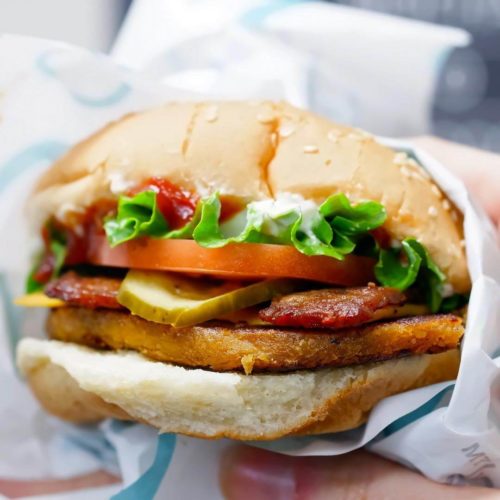 The “flexitarian” diet’s appeal has grown over the past few years. More consumers are looking to incorporate plant-based food into their diet, often for health and sustainability, according to recent research. Experts note that the shift in eating habits helped vegan food become more mainstream.

Globally Local founder James McInnes opened the vegan fast-food chain for franchising across Canada and the U.S. in June 2018. “We’re not just trying to be a restaurant. We want to be a global fast-food chain,” McInnes said in an interview with the London Free Press. His philosophy toward vegan food is simple: by making it convenient and familiar — “The stuff that people think you can’t have when you’re a vegan” — more people will be willing to try it.

Tim Hortons’ menu expansion followed the success of the Beyond Burger at A&W Canada, which boosted sales 10 percent after being added to the menu in June 2018 The fast-food chain launched Beyond Meat breakfast sandwiches last March.