The world’s first electric Ford Bronco is almost here — and it’ll have the option for vegan seat coverings.

The Ford Bronco is an American icon. The Detroit-based car manufacturer first introduced the SUV in 1965 and made it until 1996, when it was discontinued to make room for new vehicles.

After over two decades, a small number of people will be able to drive a vegan-friendly electric Bronco thanks to LA-based design studio Zero Labs. The new all-electric vehicle, based on the 1966-77 Ford Bronco model, features a carbon fiber body, walnut and bamboo interior paneling, and the option for vegan seat coverings.

“We realize, this isn’t for everyone. That’s OK because we could never make enough for everyone,” says the studio’s website. Zero Labs will make 150 electric Broncos, all hand-made in LA. The company claims that its SUV will have 400 times more horsepower than its predecessor. 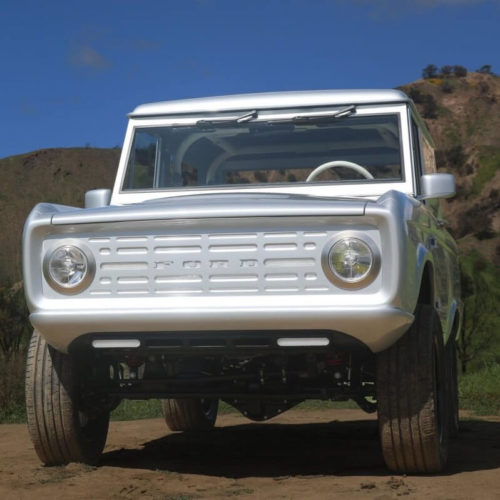 Are Vegan Electric Cars the Future?

While the upcoming Bronco isn’t a legitimate Ford car, the company is planning on reviving the model with a hybrid version but additional details are under wraps. The SUV is expected to launch in 2020.

The popularity of the once-mocked electric car has grown in recent years as more consumers grow concerned over carbon emissions from their vehicles. According to the EPA (Environmental Protection Agency), the transportation industry is one of the largest contributors to greenhouse gas emissions, though those numbers also include commercial vehicles, ships, and planes.

California-based brand Tesla has played a role in helping shape the recent influx of models from mainstream manufacturers like Nissan and Volvo.

All Tesla cars can be made with vegan leather seating and some of the aforementioned companies are using sustainable, animal-free alternatives. Leather is a popular material for luxury vehicle interiors, but is a contributor to greenhouse gas emissions. A growing number of consumers are also looking for cruelty-free alternatives to traditional seating.

Zero Labs’ electric Ford Broncos are currently available for reservation and are expected to cost around $300,000.