This vegan burger is not for everyone. Found at Heavenly Free From Foods, a vegan cafe in the UK town of Newcastle, the ironically named Grim Reaper burger is supposedly the hottest veggie burger on earth.

The devilishly hot burger gets its heat from four different chilis, which combined reach 2,000,000 Scoville units. That’s four hundred times hotter than a jalapeño pepper. Cafe owner Paul Holloway told local news outlet StokeonTrentLive, “I’m big on flavors. If I put something in my mouth I want it to make me go wow!”

Holloway launched the “Grim Reaper Challenge” in July, daring patrons from far and wide to finish the flaming sandwich. He claims, “It’s not just the hottest veggie burger ever, it’s the world’s hottest burger.” Those interested in trying it have to sign a waiver, and Holloway prepares the burger with protective gloves, safety glasses, and a mask. He said, “It is a brutal burger…I got some of the mix on my wrist once and it burned for 24 hours. It’s not to be trifled with.”

No one has yet to complete the challenge. According to Holloway, the closest anyone has got is to consume a ‘chicken nugget-sized’ portion. 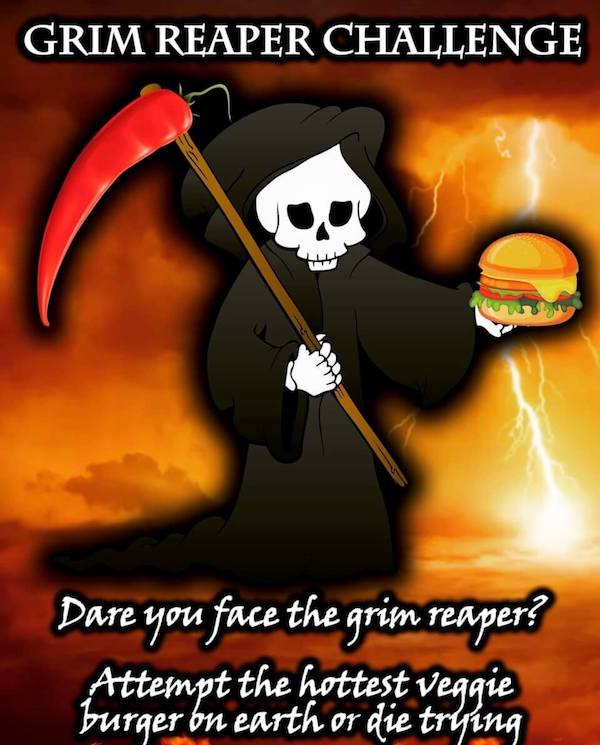 Other items on the menu are far less intimidating. The cafe was originally a specialty foods shop catering to vegans and gluten-free patrons, but Holloway transformed it into an eatery when the store failed to keep pace with supermarket competition. “I set this up because I wanted something with a soul and I didn’t feel I could achieve that with what I was doing. I wanted something which served a valuable and soulful purpose in the community,” he said.

Heavenly Free From Foods specializes in familiar comfort and fast-food that happens to be vegan. Beyond the fiery burger, the menu features plant-based pizza with vegan cheese, nachos, spaghetti bolognese, mac and cheese, chili dogs, and more. The shop also carries takeaway options from local plant-based purveyors and homemade vegan sweets. Holloway has retained some of the store aspects, creating a mini market of allergen-friendly foods for his community to enjoy.