There are a few things I’ve learned after living in New York City for four years. Always carry an umbrella. Buy waterproof boots. And own a jacket that can withstand icy winds threatening to knock me and my two bags of groceries over as I make the 15-minute trek back to my apartment. So I was more than ready to put a Wuxly Movement parka to the ultimate test during the first snowstorm of the season.

Better Than Down Feathers

Winter parkas that claim to withstand harsh winter temperatures are often filled with goose down. Most notably, there’s Canada Goose. Its parkas are stuffed with feathers, lined with coyote fur, and despite pending legislation that would ban the sale of fur, are very popular in colder climates like New York. When winter comes around, you usually can’t walk down a Manhattan block without seeing one. But, Wuxly Movement offers an ethical vegan and environmentally-friendly alternative. Instead of goose down, it’s filled with PrimaLoft Gold Insulation, which is made from 55 percent recycled plastic. And it outperforms down, even in wet weather.

“Wuxly parkas are all water-resistant, super breathable and super warm. Both the insulation and outer shell repels water, so snow, slush, and rain can’t take a Wuxly Parka down,” James Yurichuk, CEO and founder of Wuxly Movement, tells LIVEKINDLY.

The transition from fall to winter in Queens has been harsh. The sun now sets at 4:30 (ew), it’s cold, and on top of that, it’s windy (awful). For the past month, it’s rained nearly every week. We were hit with a windy two-day snowstorm at the beginning of December, which I walked two miles in when I was struck with the inspiration to buy whole spices for baking vegan cookies. With previous coats, I would have regretted my decision.

Yurichuk explains that goose down “will deteriorate, get moldy and lose its heat retention over time.” But, that won’t happen with PrimaLoft Gold. Unlike goose down, it’s not bulky. Even though my experience is limited to the city, PrimaLoft Gold was made to withstand the Canadian winter and -22F temperatures. Feathers were once a staple of winter wear, but Wuxly Movement proves that they’re unnecessary.

Yurichuk adds, “The technology and Canadian craftsmanship that goes into a Wuxly Parka will allow you to survive winter after winter with a big smile!” 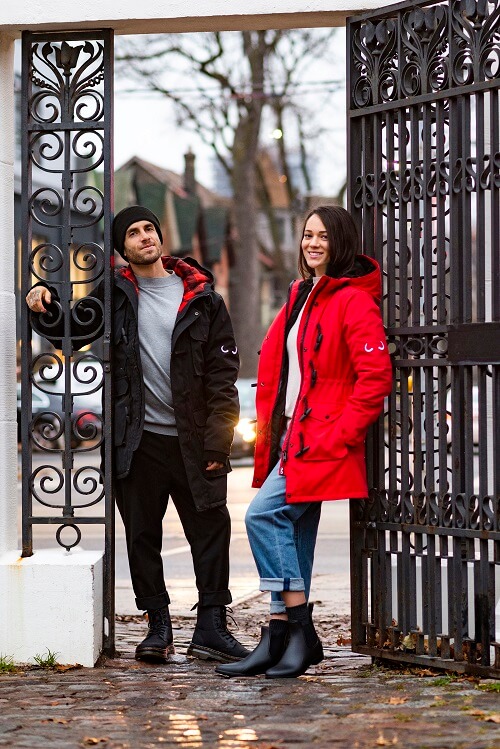 Before living in the city, my winter coats were always wool. And after I went vegan, a PU leather jacket. They were coats that that could withstand the rain because I usually just had to run from inside to my car.

But during my treks, the Wuxly parka kept me warm, dry, and unbothered by the wind and snow the entire time.

The shell of the Wuxly Movement parka is repels water, so you stay dry. The hood essentially eliminates the need for me to carry an umbrella, so my hands are free. The two fleece-lined side pockets for those moments where I forget to bring my gloves made all the difference. It also has two front pockets, an inner pocket, and one hidden inner pocket. It’s more than enough to carry my phone, wallet, and keys.

“So go ahead and do all the winter activities that you want to do this winter,” says Yurichek, “because we’ve got you covered in the warmth department.” I couldn’t agree more.

To learn more about Wuxly Movement, visit the website.