The chocolate-y bunnies feature face masks many health officials are now recommending the public wear in order to prevent the spread of the coronavirus.

“Even our Swiss chocolate bunnies are practicing social distancing. Now available for curbside pickup and deliveries,” the company captioned alongside a photo of the adorable chocolate bunnies. 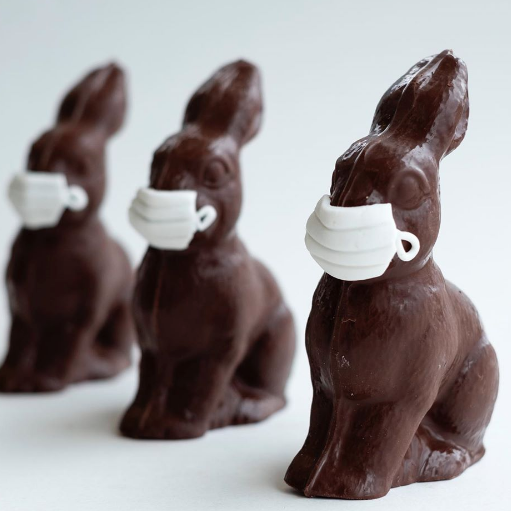 The vegan bakery was founded by Danielle Konya in 2005. A proponent of cruelty-free living and an ardent animal-rights activist, Konya says the bakery allows her to promote compassion for all.

“Eating vegan food is the easiest way to make a difference on the planet,” she told the Washington Post. “Compassion starts with your fork.”

Konya first started creating baked vegan treats in the 1990s. Her 1,600-square-foot storefront bakery is now regarded as one of the best vegan bakeries. In 2012, American Express’ Departures Magazine named Vegan Treats one of the top ten bakeries in the world.

According to the bakery’s website, “as an ethical vegan, Danielle set out to make a vegan cake that didn’t just taste good, but actually tasted better than any other cake, vegan or otherwise.”

Cakes are available in flavors vanilla bean and chocolate, as well as specialty flavors like Orange Creamsicle, Caramel Pecan, Lemon Raspberry, and Strawberry Amaretto—just to name a few.

The bakery even sells vegan soft-serve. Decadent flavors include Blueberry and Cheesecake, Brownie Batter and Pudding Pop, and Chocolate and Banana Cheesecake.