Animal lovers working from home due to the coronavirus virus—rejoice! You can now partake in Zoom meetings with rescued farm animals.

California-based non-profit animal sanctuary Sweet Farm launched an initiative last month that allows companies and schools to interact virtually with some of its rescued animals. The “Goat 2 Meeting” program allows people to video conference with a number of adorable “Sweet Farm Animal Ambassadors,” including goats, cows, sheep, and llamas.

LIVEKINDLY’s editorial team took part in the new initiative during our weekly video conference call on Monday. Sweet Farm’s co-founder Nate Salpeter gave us a mini-virtual tour of the sanctuary and showed us a number of rescue animals—including sheep, lambs, goats, and a turkey.

We were also able to meet Magnolia, a cow that was rejected by her mother as a baby. A local cattle rancher found her malnourished and with a broken hoof and brought her to Sweet Farm. After months of bottle feeding—and lots of love—Magnolia is now healthy and has become best friends with Argyle, another rescue cow residing at the sanctuary.

Salpeter said the funds raised via the new program will help offset the costs for schools to take part. This will allow more students to learn about these special animals through the sanctuary’s free school virtual field trips. 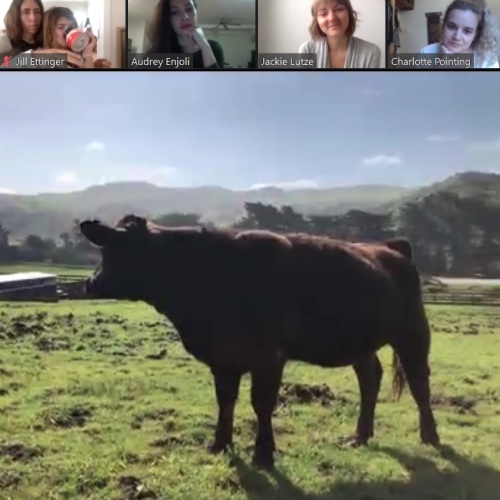 Magnolia the cow made a special appearance during LIVEKINDLY’s editorial call.

Sweet Farm is one of the first non-profit sanctuaries in the world that addresses the global impacts of factory farming on the planet.

The sanctuary’s agriculture program—which houses more than 100 types of vegan crops—emphasizes the benefits of “veganically grown, heirloom crops” and educates the public about plant-based living.

Sweet Farm has raised more than $5 million through its technology program. Funds go to support start-ups working to make the world’s “food system more compassionate and sustainable on a global scale.” 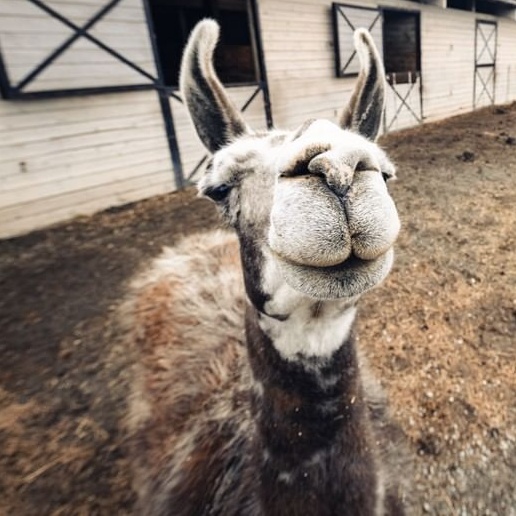 The sanctuary has more than 125 rescue animals, including Paco the llama. | @TheSweetFarm

Sweet Farm is home to more than 125 rescued animals. The non-profit believes each of its rescue animals has his or her own unique and special story.

Its farm-animal ambassadors enable the public to learn more about the animals and connect with them on a deeper level.

Salpeter told LIVEKINDLY the new program gives Sweet Farm Animal Ambassadors the opportunity to connect with people throughout their day.

“We enjoy seeing the smiles on people’s faces as we introduce them to the animals and educate them about their individual backstories. The Goat 2 Meeting program has also been an effective way to simultaneously execute on Sweet Farm’s mission and brighten people’s day during this crazy time,” he said.

He added: “Companies and individual groups that donate for us to join in their meetings are also helping subsidize the cost so we can offer these same types of experiences to teachers for free. It’s really a win all around for everyone, especially the animals.”

But Salpeter says the animals aren’t forced to partake in the virtual meetings if they don’t feel up to it.

“The animals are all free to be themselves. Just like humans, they aren’t always in the mood and want to distance themselves. We respect that and so have all of our Goat 2 Meeting patrons,” he said.