You can now get vegan chorizo at Spar supermarkets in the UK.

The new meat-free option was shared on Instagram by the account Budget Vegan UK. “Not very budget but thought I’d share anyway because this is incredible?! Found this vegan chorizo in my local Spar,” they wrote. “Didn’t purchase because I can’t afford that price tag but it’s so incredible to see such amazing choices in small shops these days.”

The spicy vegan sausage — which retails for £3.99 — is made by Portuguese brand VEG IN, which also makes plant-based burgers, steaks, black pudding, mushroom pâté, and ready-meals.

Launched in 2014, VEG IN seasons its palm oil-free chorizo — made from soy and wheat protein — with red pepper paste, garlic, and spices. 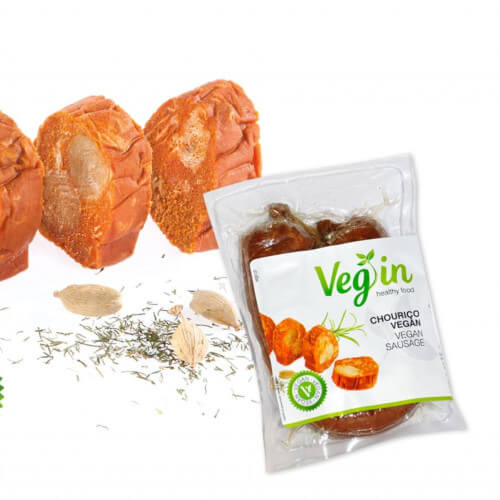 Vegan chorizo by Portugal-based brand VEG IN is now at Spar’s UK stores. | VEG IN

The Dutch multi-national supermarket chain’s vegan options are growing. Last January, Austrian stores added a private label brand with more than 100 new vegan products, ranging from veggie burgers and ready-to-eat meals to dairy-free milk and ice cream. Spar Austria encouraged consumers to eat less meat on its website: “Why not start as a flexitarian with a vegetarian day one day a week?”

In February, North England locations launched a range of grab-and-go sandwiches under its private label brand. Options include a grilled vegetable and hummus wrap, a coronation chickpea sandwich, and a spicy bean wrap with guacamole, jalapeños, and salsa.

The range was developed for Spar by wholesaler James Hall & Co. to appeal to shifting consumer habits. The company is “excited to see how the range develops over the coming year,” said sales and marketing director Peter Dodding.

Demand for vegan food is high in the UK. Growing concern over animal welfare fuels consumer demand for more plant-based products, as does agriculture’s negative impact on the environment and human health.

According to Mintel data, the country launched more new vegan products than any other nation in 2018, and according to a survey from earlier this year, 91 percent of Brits now identify as flexitarian.

VEG IN vegan chorizo is available at Spar supermarkets across the UK.