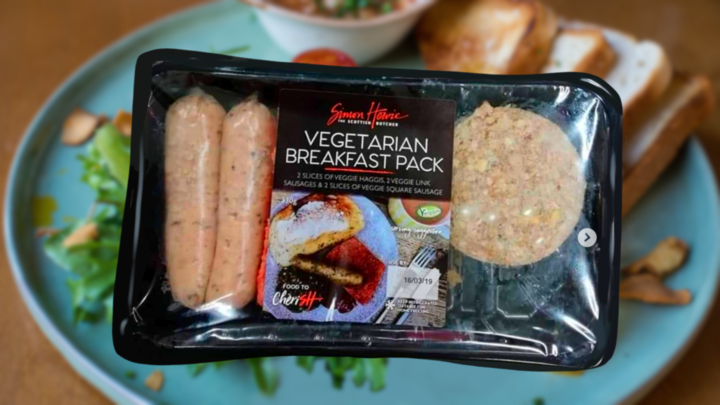 You can now buy vegetarian breakfast packs, complete with vegan haggis, from Aldi supermarkets in Scotland.

The breakfast packs — which include vegan square sausages, link sausages, and haggis made with vegetables, pulses, and spices —  are made by Simon Howie, a Scottish butcher, and are only available for a limited time. According to a Twitter post by the company, “when it’s gone it’s gone.”

Simon Howie primarily specializes in cuts of meat, however, its plant-based range is expanding. “While The Scottish Butcher may not be the first place you think of for delicious meat-free alternatives we are proud of our growing vegetarian range,” Simon Howie notes on its website.

Packs of the square sausages — a Scottish breakfast classic — first appeared in Aldi stores in October last year. According to the butcher, the plant-based product was released in response to rising demand.

As more and more people become aware of the ethical, environmental, and health consequences of meat and dairy production, flexitarian lifestyles are becoming more popular.

Earlier this year, a study by Sainsbury’s revealed that 91 percent of Brits are now consciously reducing their meat intake, and in February, it was revealed by Kantar Worldpanel that 66 million UK residents ate a total of 150 million plant-based meals throughout 2018.

Fraser McKevitt, the head of retail and consumer insight at Kantar, said at the time, “looking back on 2018 as a whole, one of the most notable consumer trends is the shift to a more plant-based diet.”

He continued, “Today, 1% of all households include a vegan, 5% have a vegetarian and 10% have flexitarians in their ranks. This move has contributed to consumers eating a total of 4.4 billion meat-free dinners in 2018, an increase of 150 million meals on the year before.”

Aldi and Simon Howie aren’t the only companies responding to rising demand. A number of UK supermarkets have added new plant-based products to their shelves in recent months, including Marks & Spencer, Tesco, Sainsbury’s, and Iceland.